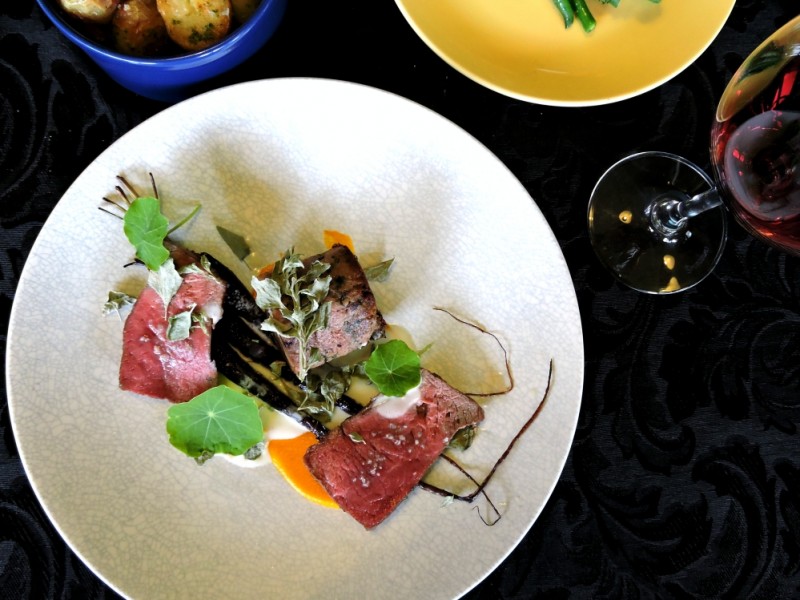 You know the old saying, All good things must come to an end.
I’ve never been a fan of this sentiment.
If something’s good, why should I have to concede its conclusion?
It is sadly true though, as much as I want to deny it, all good things do inevitably come to an end.
For example, my ravenous blogging journey on the Land of the Long Lunch trail. This spectacular, covetous adventure is now drawing to a close.

Driving alone through the windy Adelaide Hills roads to arrive at my final LOTLL destination of Mount Lofty Ranges Vineyard, I reflected fondly upon this eventful winter, that is almost over.
The incredible meals I’ve blessedly enjoyed.
The remarkable restaurants and cellar doors I visited, some brand new to me, some already familiar, but all fabulous in their own individual ways.
And the amazingly talented Chefs and passionate owners I’d been fortunate enough to meet and spend time with.
Pulling up to the cellar door, I had an open and hopeful heart that I would be left to travel onwards from here with only heroic memories, and could close the final scene in my LOTLL movie reel with a happy and spectacular ending. 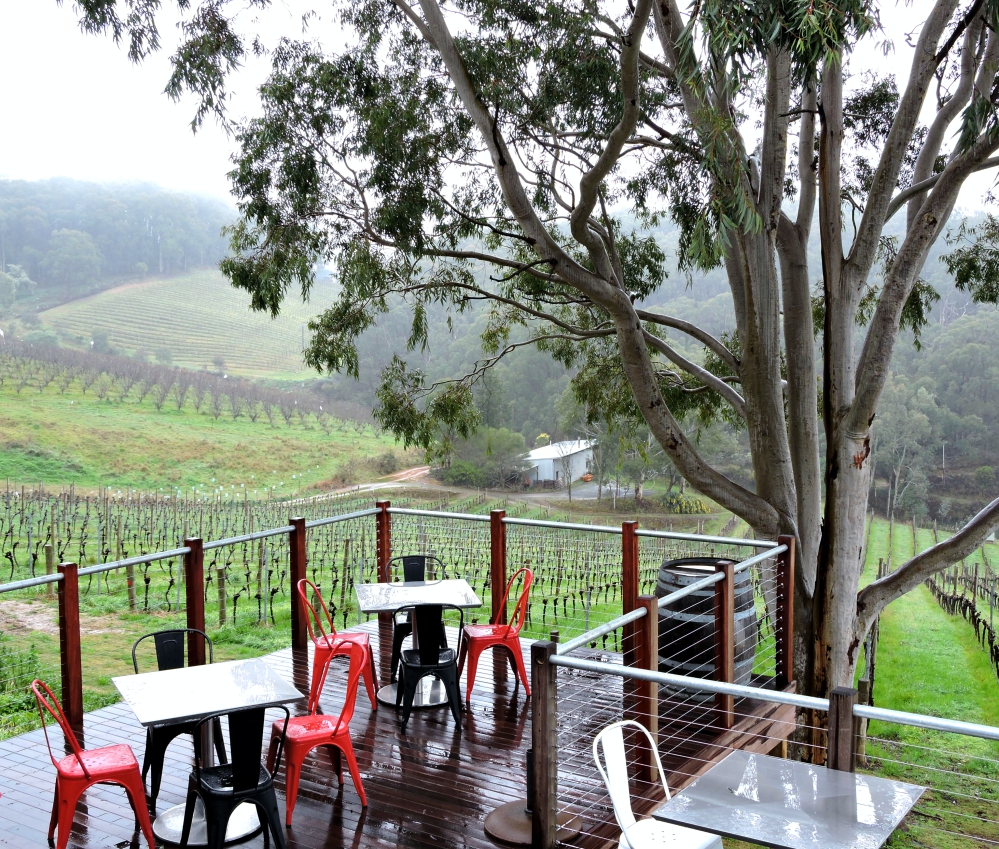 What I knew about Mount Lofty Ranges Vineyard…? Not much.
I knew they were a 5 star winery.
I knew they were a quaint and unassuming cellar door with stellar hill views.
And, that’s about it.
Surprisingly enough, this seems to be the general response from everyone that I have since discussed the winery with, if not even less knowledge than this.
But, this is one understated classic we should all have in our collections.
And although they have the makings of a runaway Hollywood blockuster, they are steadfast and unapologetically Indie.
Moving forward relying solely on word-of-mouth and a fantastic industry reputation, rather than mainstream advertising and large scale stockists.

Mount Lofty Ranges Vineyard (or MLRV for short from here on in) was established in 1992, actually one of the original hills wineries, a pioneer in the region if you will.
The current owners Sharon – a former executive producer in the television and film industry (this may, or may not be the reason for my unabashed usage of movie connotations…) and Garry – previously a wine importer, bought the vineyard about 6 years ago from the original vintner on a leap of faith, wanting to escape their high pressure Sydney based careers and shift to a simpler life in Sharon’s home state of South Australia. The grass was greener for them, or should we say the vines… 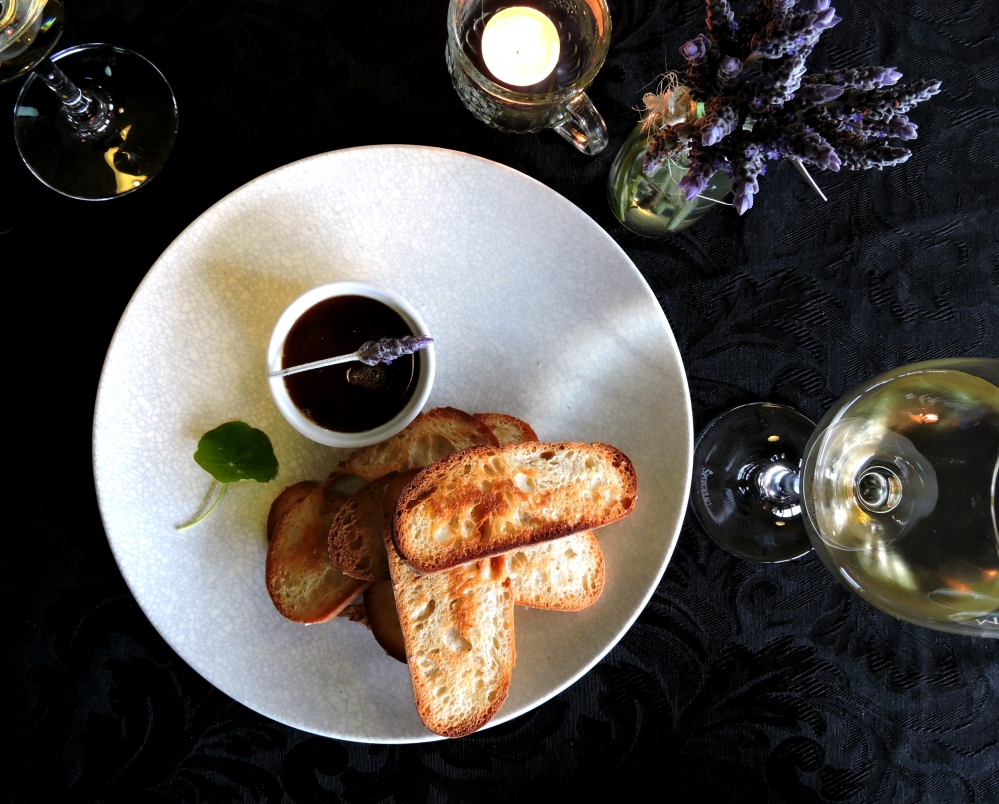 What Sharon and Garry didn’t expect, was that their tranquil winery ‘hill change’ would introduce them to a life more pressurized than anything they’d ever known.
As any farmer will attest, holidays are a thing of dreams. Rising at dawn and working until dusk 7 days a week is normality.
Sharon and Garry took ownership of their winery and made a calculated and conscious choice.
They wanted to establish boutique single vineyard, estate grown wines.
Working a sustainable farm, and utilizing the age old practices of hand pruned and handpicked grapes throughout the entire vineyard.
They decided to pour every resource they had, into creating wine that was worthy of a decanter at any top restaurants table.
And, as the last four years of being voted a 5* winery by James Halliday will show you, they’ve succeeded in their quest. 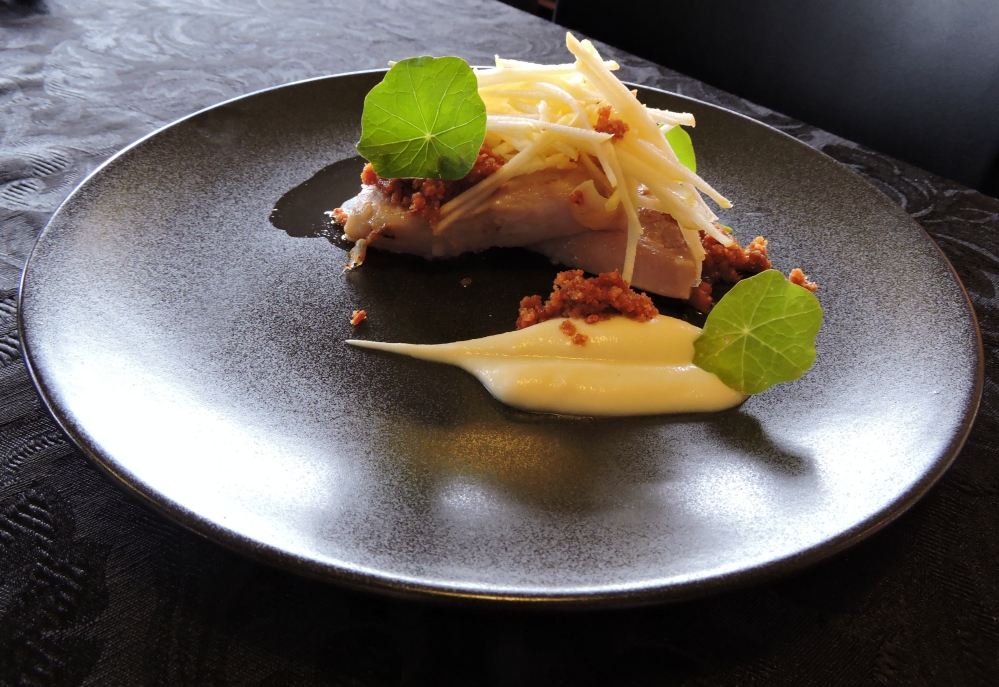 Having reached their benchmark of exceptional wine and keeping it consistently intact, two years ago they were now ready to evolve and put some focus on their food.
They demolished the little hut that once housed their cellar door, and in its place built a rustic and cosy new dwelling with panoramic views of the surrounding countryside and a focus on reclaimed materials to honour the history of our fine state.
They began offering seasonal platters and pies to their cellar door guests for lunch, and this arrangement bode them well for quite some time until a few short months ago when the winds of destiny carried an ambitious and creative chef to their cellar door…

Chef Matt Fitton, now 30, was 25 years old when he commenced his apprenticeship at the Playford Adelaide (formerly the Sebel).
After learning he had won Restaurant and Catering’s Apprentice of the Year in 2013, and was a finalist in the 2015 ‘Young Chef of the Year’ awards, it was abundantly clear to me, although new to his trade this man is certainly no novice.
Matt relished in his apprenticeship and subsequent position as sous chef at the Playford, but with his own personal culinary story to tell, it was time for him to move on.
Taking yet another leap of faith, Sharon and Garry recently made the momentous decision to take Matt on full time, and give the seriously talented chef free run of their cellar door kitchen with total unrestraint of his menus. 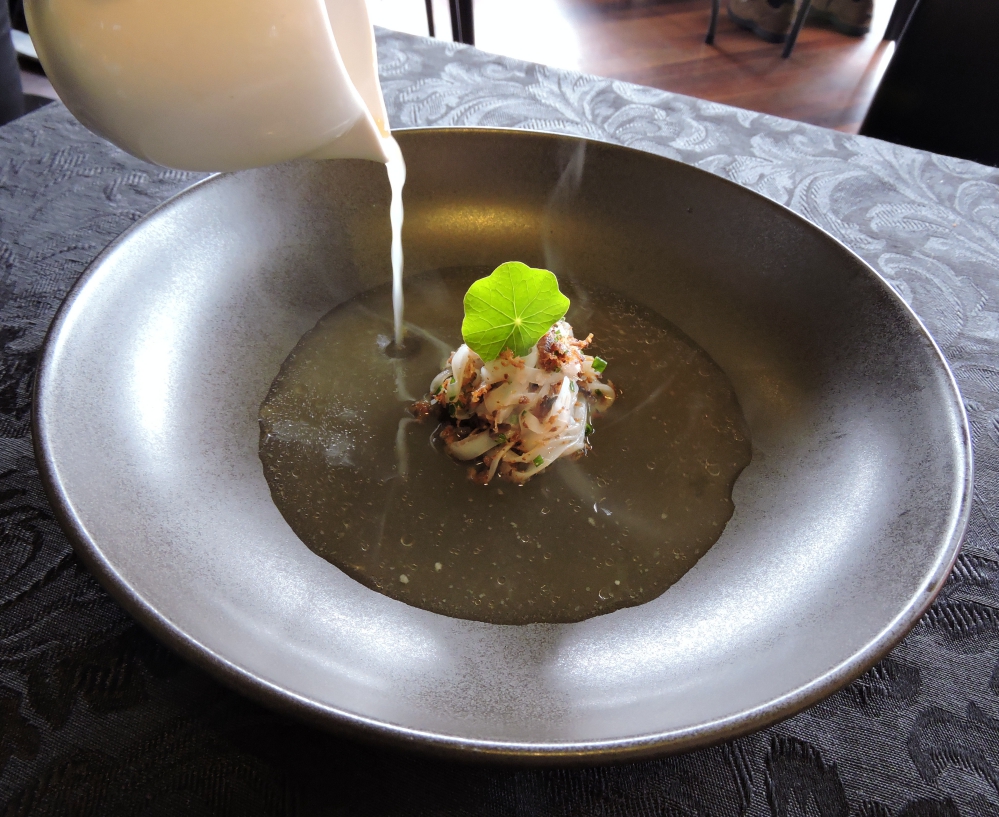 After explaining that I was dining alone, Garry wouldn’t hear of it and insisted Sharon take the afternoon off, so that she and I could enjoy a leisurely lunch together.
Looking over the menu, I was surprised and delighted.
I had no idea what to expect, but I can assure you it wasn’t what I actually got.
Duck eggs? Squid, Chicken and Pork together in one dish? This was distinctive food.
I couldn’t wait to get started.
Ever the consummate host, Sharon proclaimed that the dish choices were mine alone to make.

“What would you most like to try Bree?” she enquired.

‘Hmmm… Everything’ I greedily thought, and then consequently said out loud.
Sharon happily obliged and together we shared all three cooked entrée choices of slow cooked Duck egg with potato and truffle, and the South Australian shaved squid with dried chicken, herbs, white onion and smoked pork fat, then finally the Caramelized Pork Loin with Cauliflower, pork skin crumble and nasturtium. I also expressed a sincere interest in the house made Duck parfait on the charcuterie board, but not wanting to spoil our appetites on smallgoods, Chef sent out the parfait alone.
How can I describe this entrée session in one word…?
Joyous. 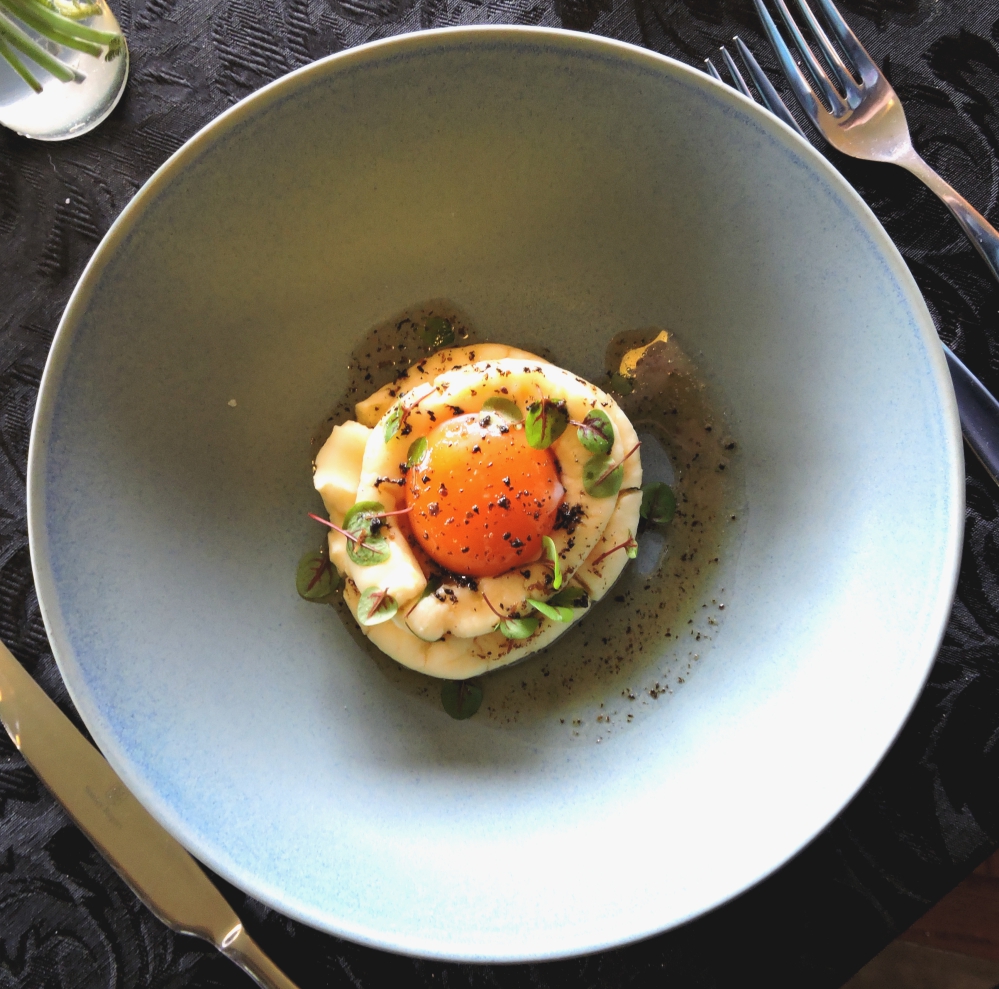 The parfait was rich and buttery, but light as a feather and smooth as silk. An absolute delight to eat.
The Pork was poached perfectly and tender as can be, the inclusion of freshly foraged nasturtium added a delightful contrasting bitterness.
The squid, that combination of flavours was interestingly spectacular. The hot broth rehydrating the chicken skin and adding an element of drama to this already show stopping dish.
But, the duck egg.
Adding something as polarising as a duck egg, to a menu with only limited options, is brave and commendable. The flavours of the rich egg with the silky smooth truffled puree were truly divine… But what is that I taste? Hidden under the luscious potato like racy lingerie under a Burberry trench, were very cleverly placed, diminutive pork scratchings. So, so sexy.
I loved this dish so much, I honestly can’t express the feelings of happiness just thinking about it invokes.

Next for main we were a little more restrained, we only ordered two dishes.
The Tatiara Lamb shoulder and back strap with heirloom carrots, saltbush and garlic buttermilk and the Chicken poached in its own stock with macadamia cream, field mushrooms and tarragon jus.
Of course, we also had a side of mouth-wateringly delicious crispy chicken fat potatoes and some fresh steamed greens.
The Lamb was simply gorgeous, perfectly cooked back strap left to shine naturally, and the shoulder, slow cooked in MLRV wine then shredded and reformed into a roulade. The textures and flavours worked together in harmonious unity on this dish.
The Chicken, what a thorough delight.
Super soft and moist breast with the delicious rich flavour of stock running through its plump meat. The rich jus surrounding it was full of flavour, and those earthy well-seasoned mushrooms, yum. The macadamia puree was smooth and sweet with a subtle nuttiness to bring it all together. This was the perfect lunch dish to me. Light, but satisfying in every way. 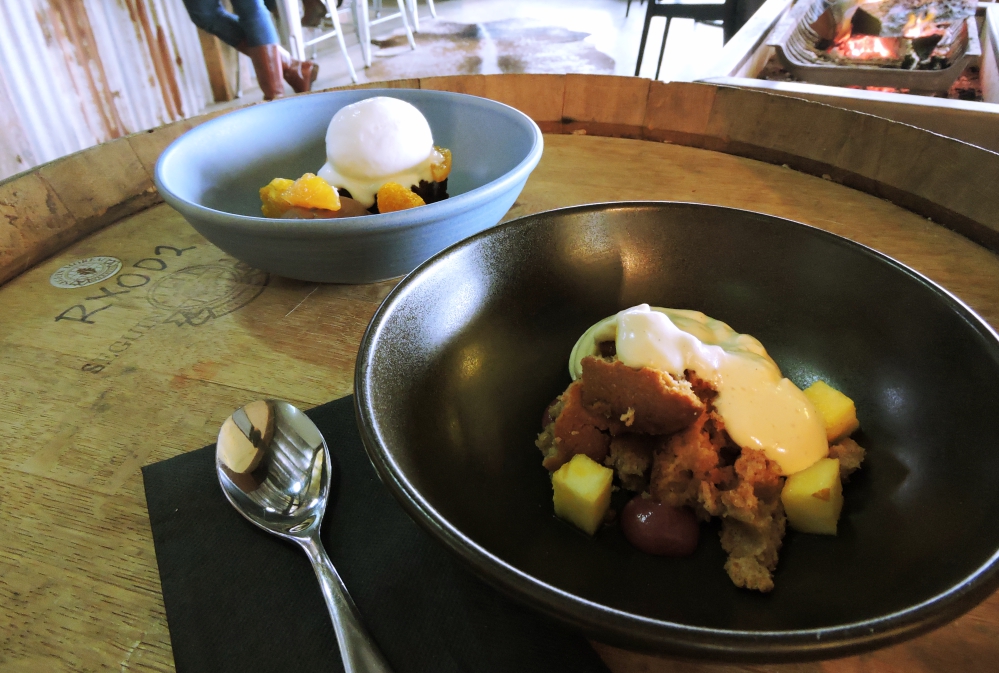 After mains, we enjoyed both dessert options of Basket Range Walnut and Chocolate brownie with textures of mandarin, mousse and vanilla ice cream and the Adelaide Hills warm pear cake with sour rhubarb, spiced pear and Pedro Ximinez custard.
The brownie was decadent and rich, and I enjoyed the theme of mandarin running through it. I also have to make special mention of the mousse, it was sheer chocolate perfection.
I naturally gravitate towards spice and fruit, and the pear cake had pretty much everything I love in it. Sitting by the fire and devouring these comforting desserts with a wine, was a wonderfully gratifying way to finish such a truly memorable meal. 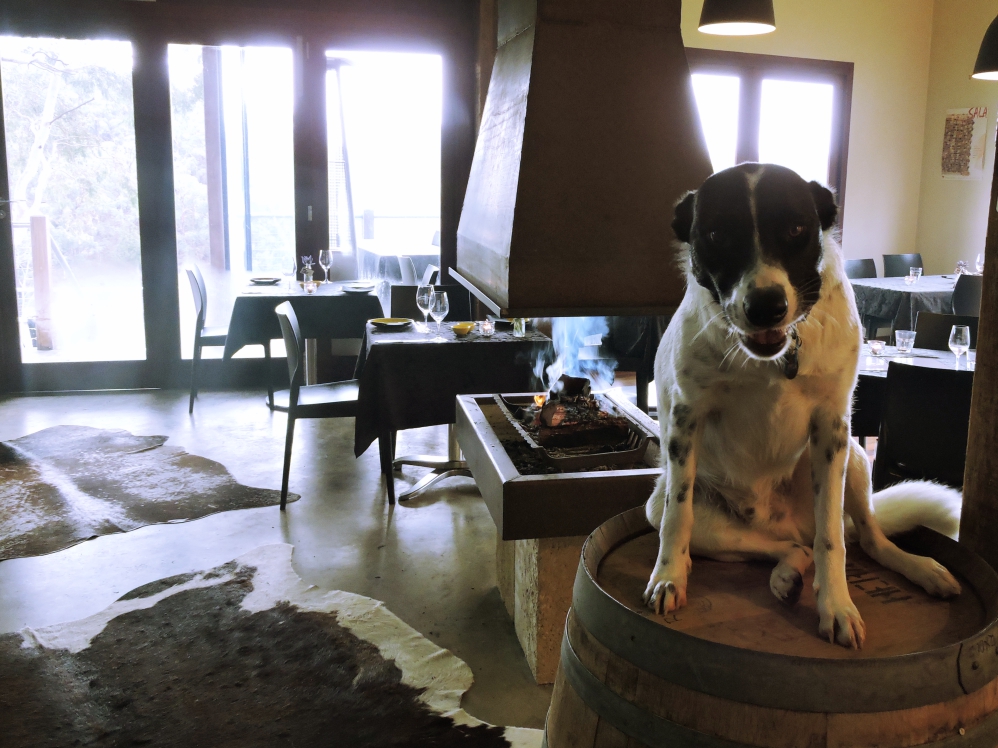 The evolutionary path for Mount Lofty Ranges Vineyard has been fraught with obstacles. Sharon and Garry have trusted the Universe and learnt many lessons along the way. They will continue to build their legacy, but now they won’t be doing it alone. Fate sent Matt, and their amazing restaurant manager Cassie down the windy Harris Road, straight to their cellar door.
And I shall henceforth now call them, The Fantastic Four.

In hindsight, maybe I’ve been wrong all along.
Maybe, just maybe all good things don’t have to come to an end.
Maybe they just change, evolve and grow, to become new beginnings instead.

To find out more about Mount Lofty Ranges Vineyard and their spectacular lunches and wines, please go to the following link; http://mtloftyrangesvineyard.com.au/

To get on the final leg of the Land of the Long Lunch trail with us, and give yourself one last chance to be a super lucky competition winner, please go to the following link; http://landofthelonglunch.com.au or check out my blog post HERE for the details.