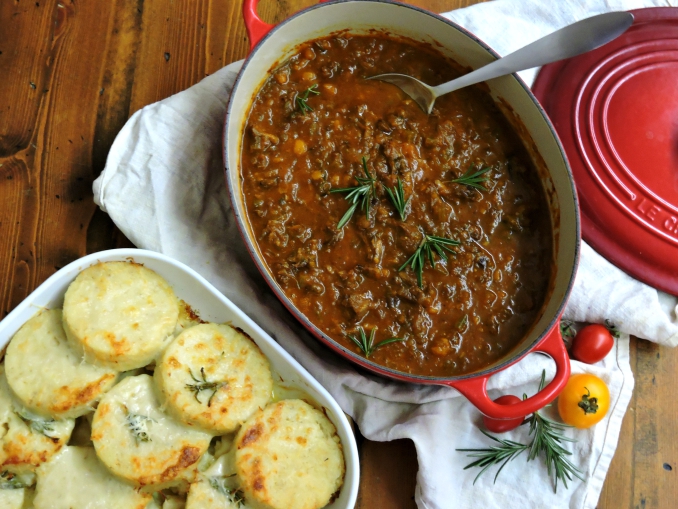 Let me begin by stating a couple of facts;
1. I have had a lifelong love affair with Alpaca’s since I saw one called Charlie on Totally Wild when I was about 12 years old.
2. Alpaca’s always poo in one spot… No crap.
3. Alpaca’s are seriously gorgeous.

Ok, now we’ve got those entertaining, factual points out of the way, let me state a few more;

4. Alpaca’s have been farmed for thousands of years in South America for not only their soft, soft wool but for their sweet and mild meat. Loooong before their bovine besties ever made their delicious debut.
5. Alpaca meat is super-dooper healthy. Compared to the other ‘mainstream’ meats like beef, lamb and pork, it’s by far the leanest. High in protein, high in iron and low in fat.
6. Alpaca’s are seriously tasty.

Now, before you get all P.E.T.A. on me, let me tell you a little story…

Note to Everyone: Unless you are a Vegetarian (and not a quasi-vego who still wears leather), your animal rights arguments against eating Alpaca, are quite literally, meat headed.

Once upon a time, in 1990, a young woman named Adrienne Williams was at the Royal Adelaide Show.
It was there, across a crowded room, that she first locked stares with destiny.
It was love at first sight.
A tall and mysterious, curly haired, foreign stranger, with a big toothy smile and kind eyes.
It was there that she met, her first Alpaca.
After this chance encounter, Adrienne and her new husband Chris, decided to trust in fate and took a blind leap of faith. They embarked on an epic journey together, and history began…

Fast forward to 2015. Adrienne and Chris have built an Alpaca farm with one of our nations largest coloured herds, an unparalleled number of champions and some of the most highly awarded and finest Alpaca’s in Australia.
They treat their little furry children with love, care and respect.
They bottle feed the sick and orphaned babies.
The animals roam freely in large pastures.
They live a good life, without harm and fear.
They trust humans, because they have no reason not to.

But alas, this is the world of farming, and the best intentions are not always enough…
For you see, sometimes the Alpaca’s don’t make the grade. Sometimes, their purpose of providing soft, luxurious pelts for wool or being top-notch breeding stock, just cannot be met. Sometimes, they cannot be sold due to teeth problems and ailments. Sometimes, they are born and their fate, sadly, is already sealed.
No working farm could sustain itself, should it hold onto every animal that cannot produce. There’s no aged care facilities and buses to the community centre for elderly livestock. There’s no Unicorns and Fairies, in a farmyard fantasy land. This is reality, like it or not.

But Chris and Adrienne, they love their Alpaca’s. They won’t send them off without a fight.
Firstly, they sell these guys as pets. Up until the age of 12 months, they can be hand reared.
And, after that until they are 2, they are sold to guard sheep.
But then, if all hope is lost for a reprieve, they are carefully escorted in small groups to a local abattoir, where they meet a respectful, and stress free end.
Can’t say the same for bobby calves…
And battery hens…
Or factory pigs…
Or many other industrially farmed animals…
So why the stigma about a grass-fed, cared for and loved, 2 year old Alpaca?

The Williams’ respect their Alpaca’s, and they don’t want to waste their precious bodies, as so many other farms do.
They are on a mission to introduce this seemingly taboo meat to South Australia and beyond.
They hope, that their love for this remarkable product will be shared, and now, so do I.
Alpaca tastes like veal. It isn’t gamey in any way.
My children LOVE it, and it’s healthy… I know, Right?!!
The Mogwai had 3 bowls of my Alpaca Ragu in one sitting. Not too shabby for a three year old.
In fact, everyone I’ve served Alpaca to, thinks it’s finger lickin’ good.

OK, I’m not gonna lie, the first time I was told about Alpaca meat I cringed a little. Visions of my fantasy, ginger haired Alpaca Kerry, circling through my mind…
But, then I considered it.
And then, I met the Williams family and visited their farm, listened to their story and met their gorgeous herd.
And then, I tasted it, and I was sold.
I look forward to creating recipes with this beautiful meat, for years to come.
And, I promise if you open your mind and give it a go, you will too.

So I say, to all my fellow Jedi foodies and health conscious, meat lovin’ Storm Troopers…
Go forth and may the force be with you.
Don’t be a Drone, be a Han Solo YOLO and Chew-Pacca.

For more detailed information (including nutritional information and stockists), please go to the following site;