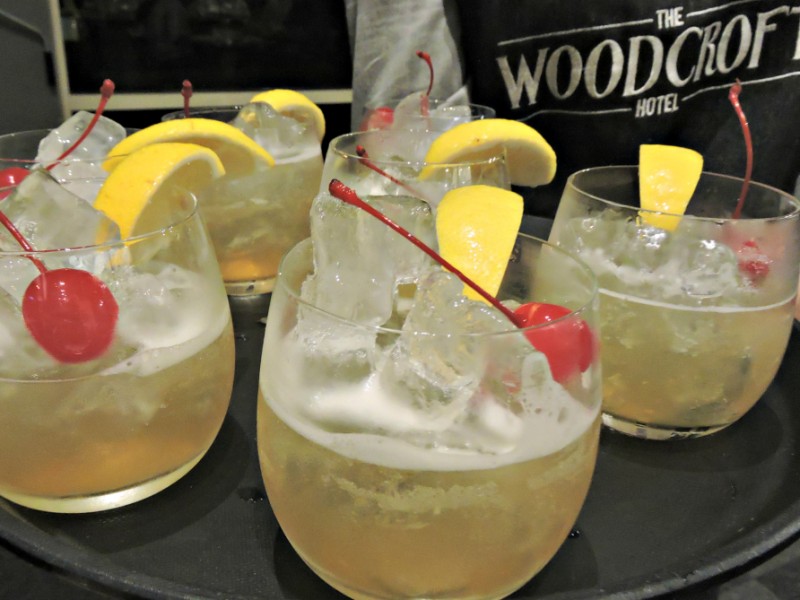 Bree Dalmeyer was a terrible student.
Don’t get me wrong, I got A’s in English and Art, but only because I was interested and therefore respected my educators enough to actually apply myself.
However, I failed miserably at absolutely everything else.
I was a D average student at high school. Even those few precious A’s couldn’t save my unruly hide.
I was a truant.
A trouble maker.
A smoking, swearing, attitude problem with legs.
I was a permanent fixture in the withdrawal room, ejected from several classes by my downtrodden teachers.
Until, I finally decided one afternoon in the second term of year 11 that I was far too advanced for such mundane institutional teachings, and left when I was 15 to join the workforce and spread my wings like the mature adult I believed I was.
Mind you, I informed the school of my intended departure without first discussing it with my long suffering parents… But then, that’s an entirely different story. Man I was a bastard to raise.

The people who meet me today, wouldn’t be able to make any correlation between the girl I was and the woman I am.
That rebellious, headstrong tiger is still in there, but she’s all grown up now.
She travelled the World. She found passionate pursuits. She aged 20 years.
I laugh at the thought of my rampant teenage ignorance.
These days I am old and wise enough to know, that I know very little.
I’m now a voracious student. I will pick the brains of any and all who can teach me something new.
I will watch, I will study, I will learn. I drink in knowledge with a thirst that can never be quenched.
So, when I get invited to any event with the word ‘Masterclass’ in the title, I go. 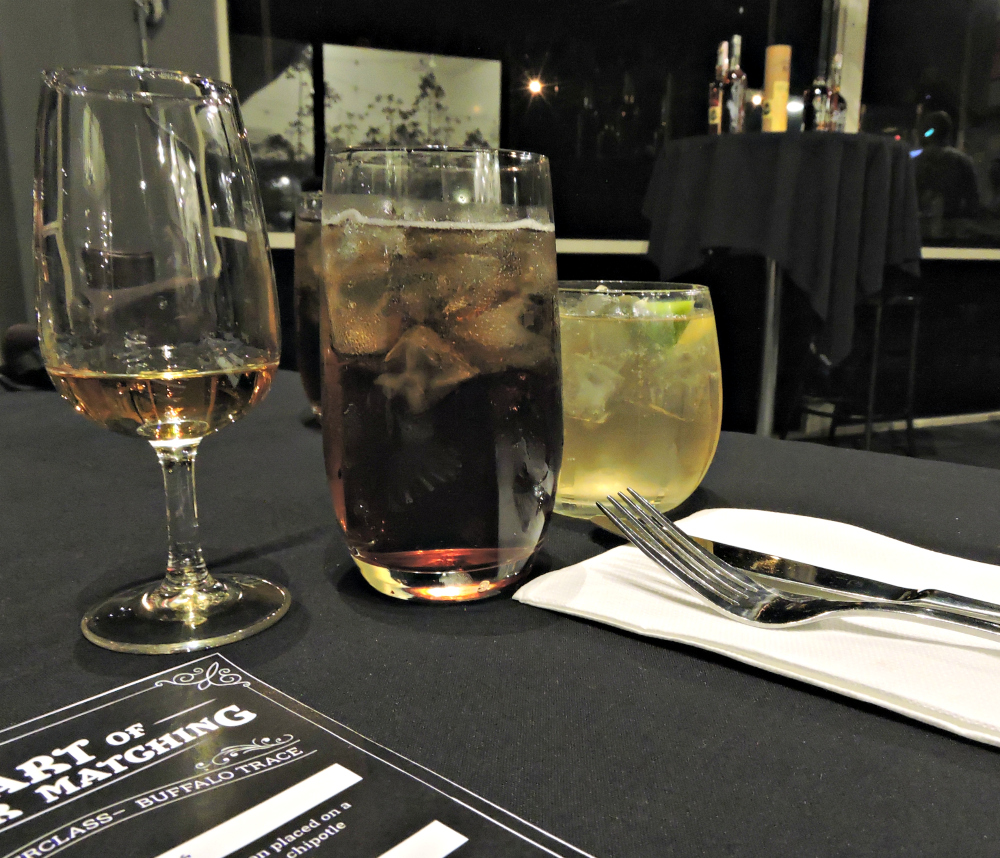 Last week, my new favourite local The Woodcroft, presented me with exactly that.
An invitation to their Buffalo Trace Whisky masterclass.
But, this was not just any masterclass. This was a degustation dinner, with matching top shelf cocktails, hosted by a bona fide scholar, in an intimate yet relaxed surround.
I was mentally already there as soon as I read the invite, and all I had to do was utter the words ‘Whisky Masterclass’ to my bourbon devotee husband Cory, and he was there too.

The Art of Flavour Matching are a series of degustation dinners held at The Woodcroft – as well as its sister venues, presented by experts and the resident Executive Chef.
They revolve around a particular spirit (think Tequila or Vodka), and will immerse you entirely in that liquor with discussions, information, and facts. The setting is informal enough to ask direct questions, and the hosts are knowledgeable enough to answer any question with ease and conviction.
My random query regarding temperance in the prohibition era was returned with steadfast dates, facts and interesting asides regarding the beer companies and the role they truthfully played in the whole sordid fiasco.
We watched the creation of tempting cocktails.
We were regaled with fun and hilarious stories about master distillers and informed about historically relevant events.
We laughed.
We conversed.
We learnt.

Meanwhile, my glass was never empty. Come to think of it, neither was my plate.
The food. The drinks. I was completely blown away… 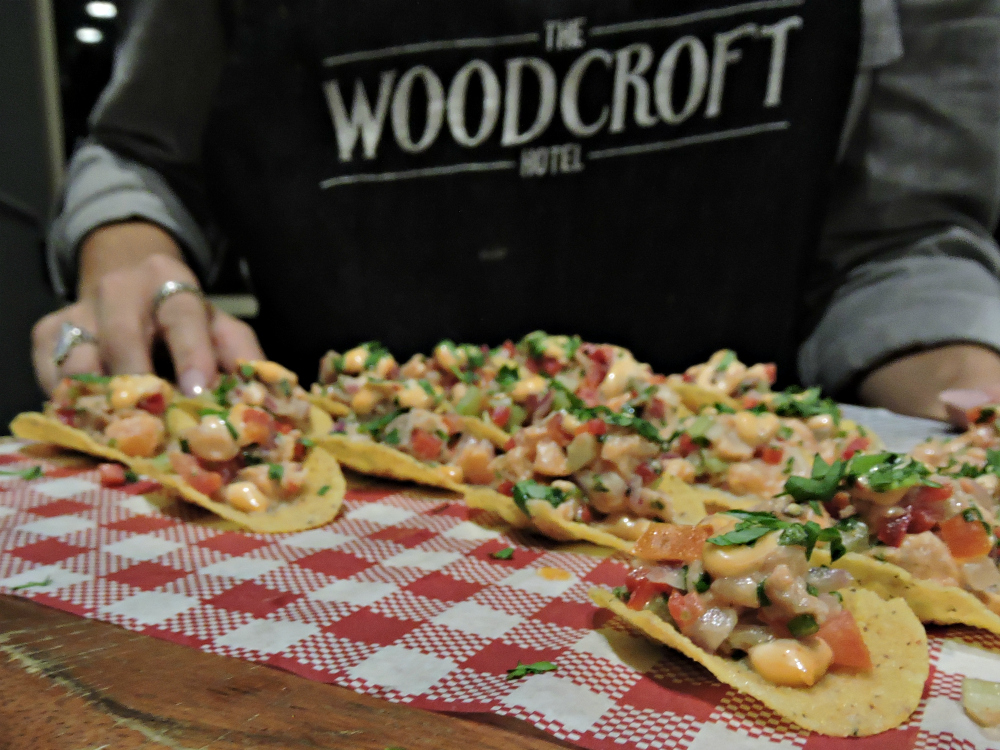 Cory and I were the last to arrive (those who know us will not be surprised by this) and we were immediately greeted with not one, not two, but three delicious drinks.
First was a fantastic Buffalo Trace and Ginger Beer mix. A super fresh aperitif, and for my ginger beer obsessed hubby, a truly victorious start to the evening.
We were then treated to a moreish canapé of Ceviche Petuna Tasmanian Salmon placed on a crisp Corn Tortilla with Chipotle Mayonnaise and their Buffalo Fever cocktail.
The latter being a whisky and Fever-Tree Cola combination, which according to Geraint ‘Gee’ David our tutor for the evening, (who might I add is not only just regarded as one of the World’s best mixologists, but is also a published author on the subject – I cyber stalked Gee to find this information out, he was far too humble to divulge) was the only cola to respectably use as it doesn’t mask the flavour of the whisky unlike other mainstream brands who did remain nameless, it enhances it.

And, we’re not talking about some low rung firewater here. Something that would benefit from over sweetened, sub-standard mixers.
We’re talking about Buffalo Trace. A top shelf bourbon hero which we were also treated to neat in this course, and its superior, Sazerac Rye. 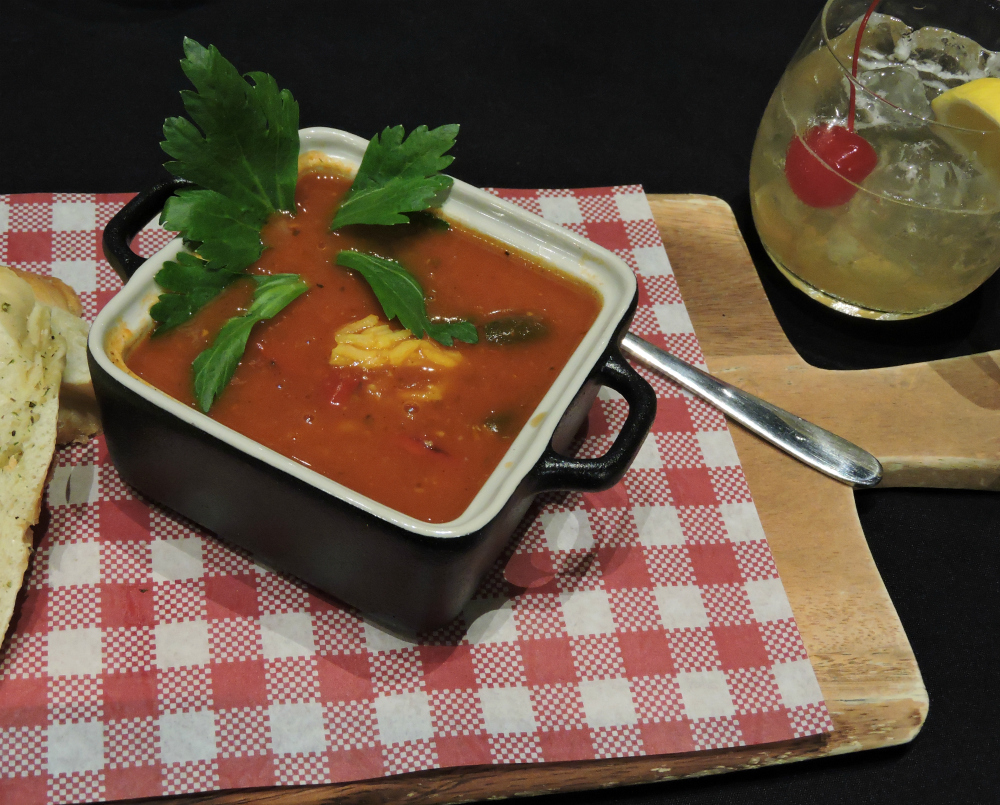 Entrée was Executive Chef Brett Tilley’s take on a Cajun classic. He went down the Chicken and Corn Gumbo route, filling it with spices, meat and seasonal vegetables, including (much to my delight) a healthy dose of Okra.
We were treated to Gee’s masterful cocktail stylings, and enjoyed my favourite cocktail of the night with this delectable dish, a Bourbon Sour.

Next up came the main, and along with it another drink. An old fashioned Manhattan.
I have to admit, I wasn’t particularly excited about the Manhattan, since the first and consequently last time I tried one, it was less than impressive. But this was an entirely different story. It was smooth and easy on the palate, especially with the final inspired touch of freshly flamed (yes you read that correctly) lemon peel oil gently caressing the glass rim.
The Southern BBQ Platter main was heaving with all manner of unbelievable deliciousness.
Crispy Pork Belly (Uh huh, yes) Slow cooked Lamb Shoulder (oh YES) and Buffalo Chicken Wings (YES, YES, YES) served with waffle fries (Oh dear Lord, Chef knows my greatest potato weakness!), apple slaw and the most delectable Buffalo Trace bourbon BBQ sauce I ever did taste.
By the end of main, I was full to my moonshining girders, but dessert was coming soon and poppa didn’t raise no quitter y’all. 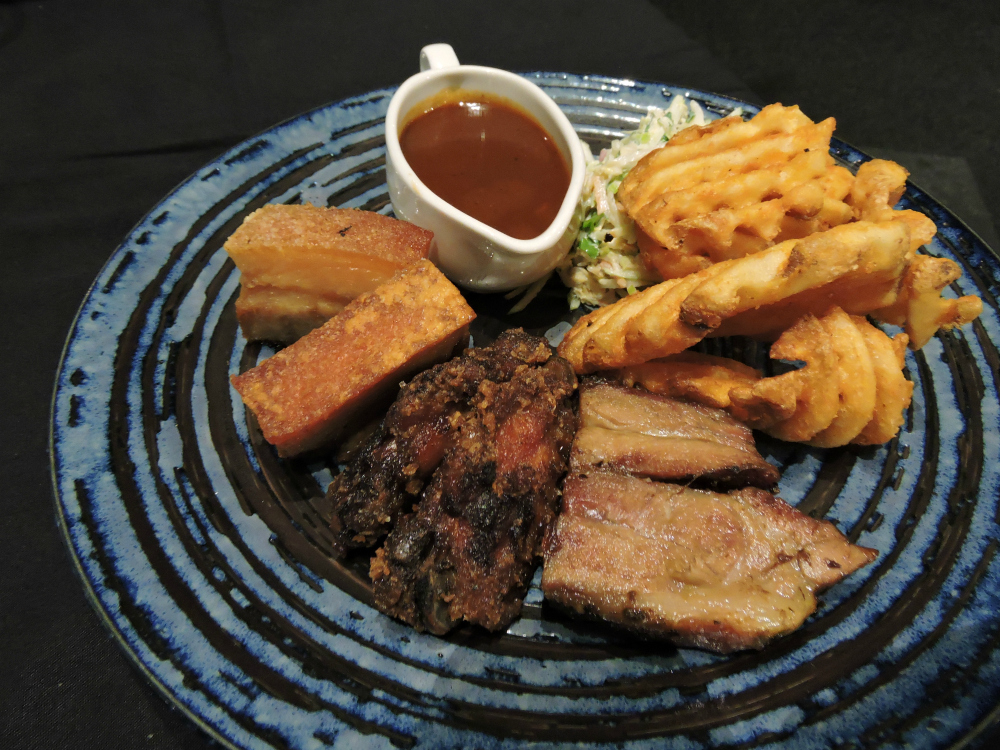 Churros served with yet another Buffalo Trace side concoction, this time (scream it with me people) CHOCOLATE BOURBON WHISKY SAUCE!!!!
I could drink a whole jug of that incredible dessert sauce.
And in true grand finale style, we were treated to one final fascinating and drool inducing demonstration, and the subsequent cocktail, the aptly named and trademarked Sazerac.
A truly pant dropping, memory forgetting brew of Sazerac Rye 6 year, Absinthe, sugar syrup and Bitters. It sounds like it would blow your tastebuds out, but was a smooth delight. Of course no whisky degustation dinner would be complete without yet another neat chaser, this time Sazerac Rye

And, what pray tell would you expect to pay for such an epic event?
$69.00 a head.
I KNOW, right!!? It’s absurd.
The drinks alone were worth that much, but then add an incredible 4 course meal, and an insightful and learned tutorial with an expert. This is serious bang for your buck. 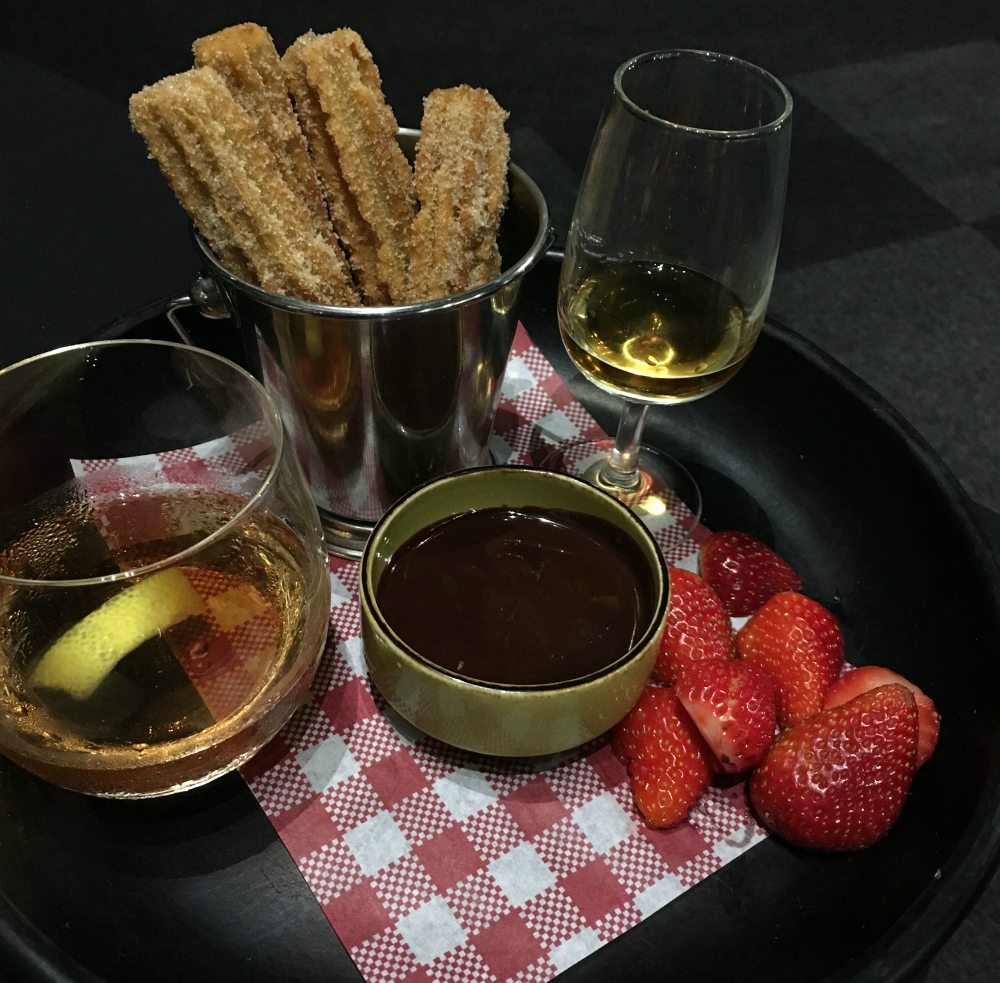 This was a true masterclass in every sense of the word.
I know more about whisky than ever before, and this is to say that I knew sweet FA before, but now I just know slightly FA.
But, I am educated about the difference between a bourbon, a whisky and a whiskey.
I know that small batch, ain’t always small batch.
I can make myself a sour… And a Sazerac.
But above all else, I have a new appreciation for this heroic distilled drop. I will drink my bourbon with renewed vigour.
I will appreciate it, because I have been shown it in a new amber light.

I will remember this masterclass fondly, as one of the best nights out I’ve had in a really long time.
And if school was always this deliciously enthralling…
Maybe, just maybe, I would’ve graduated.

For More information about The Woodcroft’s upcoming ‘The Art of Flavour Matching’ masterclasses (The next is in August and is Chivas Regal!), please go to the following link; http://www.thewoodcrofthotel.com.au/

For More information about Buffalo Trace Bourbon, Sazerac Rye and their sister products, please got to the following link; http://www.buffalotracedistillery.com/ 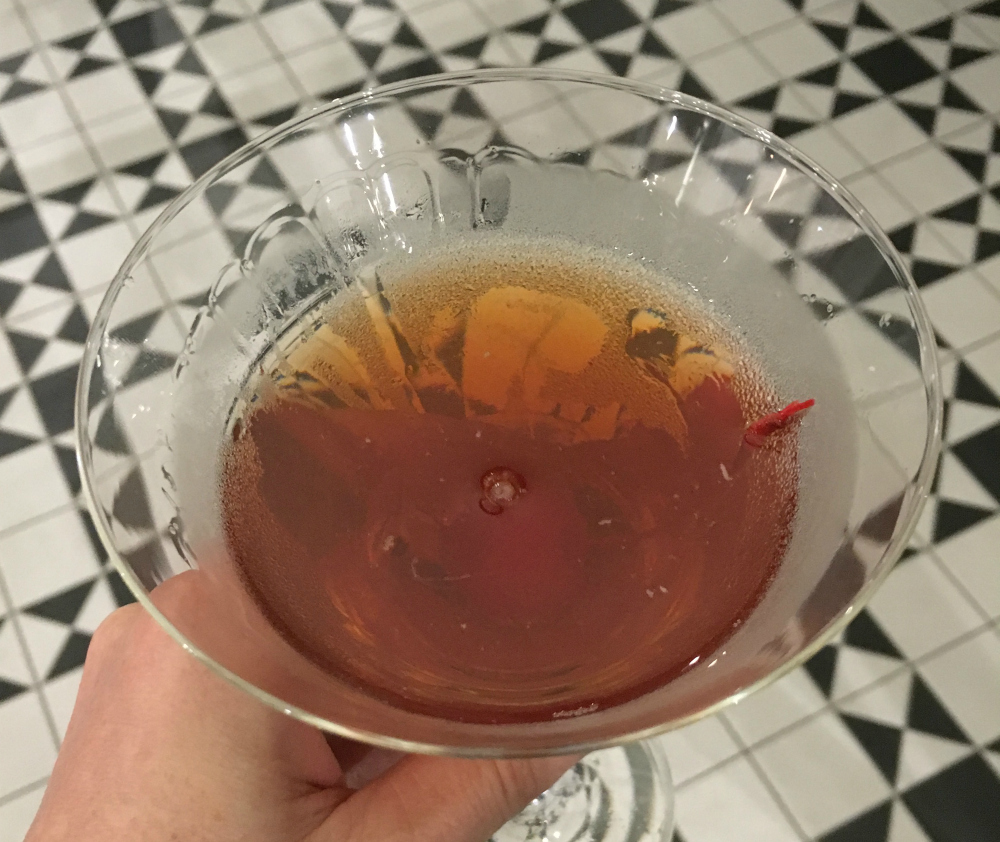