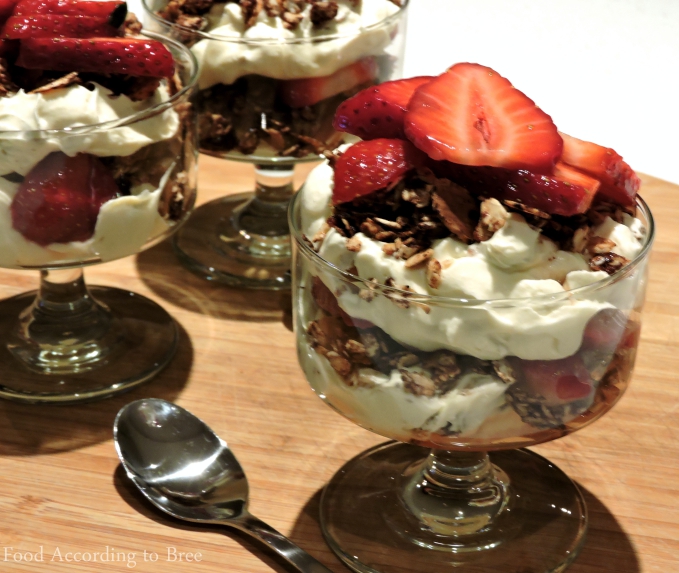 Previously on Rollin’ in the Valley…
Bree was embarrassingly last to arrive, we visited some happy hens, saw sustainable wheat and ate a luncheon treat, then onward we drove to award winning Warrick Grove…

Next stop…  dinner at Terroir.
Chef Dan Moss, is still a year away from his dirty Thirties, but he’s certainly no featherweight in the kitchen.
He completed an apprenticeship at Jolleys Boathouse in Adelaide, before venturing abroad for stints working in Germany, the UK and Canada.
Upon returning to his Clare Valley roots, Dan embarked on his first solo move, Terroir in Auburn.
Dan’s ideal for Terroir, is exactly as the name suggests, creating food with a regional flavour.
He focuses solely on locally sourced produce and keeping with seasonality. No ingredients used within his restaurants walls, will ever come from outside a strict 100 mile radius.
He wants to support the farmers and growers he grew up with. He wants to support his friends.
And, the food Dan presents, is as noble as his ethos.
We were treated to a set menu, which ordinarily brings to my mind, cringe worthy overcooked meat and substandard desserts that are left to languish half-eaten on the table, because they’re not worth the calories they contain.
This was not such an event.

Grilled Lamb Barnsley Chop, Green Lentil, Savoy Cabbage, Jerusalem Artichoke and Olive Oil… Y.U.M.
The Barnsley Chop is cut directly across the spine, thus giving you two Loins and the Marrow all rolled into one. Totally Delicious.
The chop was accompanied by an Artichoke puree so delectably smooth, and a tangy salad of cabbage and Lentils that cut through the rich meal and rounded it out perfectly.
Then, we had Dessert.
Roast Apple, Pearl barley & Wholegrain Crepe with Peanut Butter Parfait and Carob Brownie Crumbs.
The crepe was delicious, not overly sweet and paired perfectly with a parfait so divine I would’ve happily eaten a whole bowl of just that. Sprinkled around the plate, were the Carob crumbs, a surprise so lovely, my memories of hateful 80’s Carob have now been quashed. 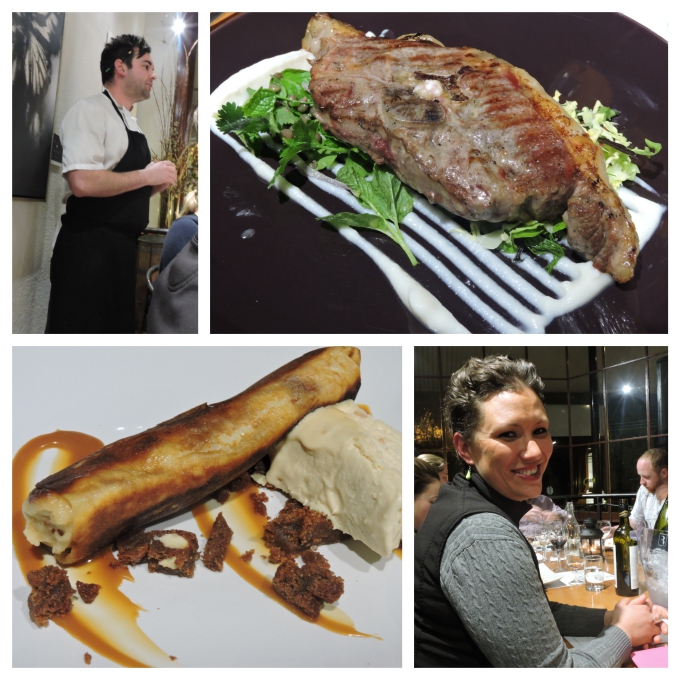 We were also being treated to delicious matching wines, courtesy of the lovely Nicola Palmer from Skillogalee Winery, yet another locally owned and operated business.
Nicola’s parents, Diana and David Palmer bought the Skillogalee Winery property in 1989, after arriving on Aussie shores from their native Scotland with their two young children in tow. 1 year later in 1990, Diana launched the first winery restaurant in the region and after all these years, they are still the only winery restaurant open 7 days a week, 364 days a year.
Nicola has been Head Chef of the restaurant since 2012, and she also shares Dan’s passion for locally sourced produce and supporting her beloved Clare Valley.
The Clare Valley is all about community and family, it’s a place that makes you want to return again, and maybe never leave…

It was now time to call it a night and I immediately began day dreaming of my soft Clare Country Club bed, we’d had a big day and yet another was to follow. I fell asleep that evening making another mental promise to myself, not to be late the next day…
6am, my alarm goes off.
I don’t have to be at the bus until 7:50am I thought, I’ve got heaps of time.
So I lay in for a short while longer, before getting up and faffing around.
Call Cory, pack my bag, have a shower… Phone ringing… Holy shit! It’s Dave.
Everyone is on the bloody bus and waiting for me… AGAIN! This is now ridiculously embarrassing…

Note to self: Start looking at the watch on your wrist, and stop being late you damn fool!

Once we were all aboard, on we travelled to Savannah Farm.
Phil and Michele Lally run this remarkable, stress free, grass fed and ethical farm, and it has been in their family for over 100 years.
The Lamb and Chicken meat they grow is used exclusively in some of Adelaide’s top award winning restaurants, as well as selling direct through their farm gate and a wholesaler in Adelaide.
They are stocked in selected Foodland supermarkets and their product usually sells out within hours of hitting the shelves.
After visiting the farm, hearing their story and sampling their produce, I can see why…

On this chilly winter morn, we were being treated to an absolute Breakfast of Champions.
First up a delicious Frittata, then Lamb and Rosemary Sausages in a fresh Ciabatta roll, Chicken Skewers and Lamb chops grilled on the BBQ with freshly squeezed Orange juice straight from the Lally’s own tree.
I was immediately taken back to the tangy Orange memories from Farrell Flat. Give me more!

The meat was delectable.
Their lamb is beautifully, soft pink and the fat is so velvety, you could eat it by itself.
The sausages were a true delight, especially when paired with homemade relish.
The Lally’s Chicken, actually tastes like Chicken. It’s so delicious, it truly doesn’t need any seasoning to bring out the gorgeous flavour (and coming from a die hard Salt fiend like me, that’s saying something).
Savannah Farm, and the meat they grow is seriously amazing.
Being a person who is concerned about humane care and high welfare produce, I was delighted to meet the Lally’s, and see firsthand the passion they have for treating their animals with love and respect and the undeniable impact that this has on the quality of their meat.

So, after eating our fill (and, seriously I was so full, I felt like Mr. Creosote) we moseyed along to The Australian Carob Co.
As previously mentioned, my memories of Carob were not fond.
I recall it tasting like a cross between cardboard and chalk.
The Carob of today is an entirely different entity indeed, at least Michael and Jam Jolley’s Carob is…
It is sweet, but not too sweet.
It has a nutty, almost fruity flavour.
It is totally delicious.
The Cacao intolerant of the World can rejoice… finally there is a substitute worthy of our taste buds. 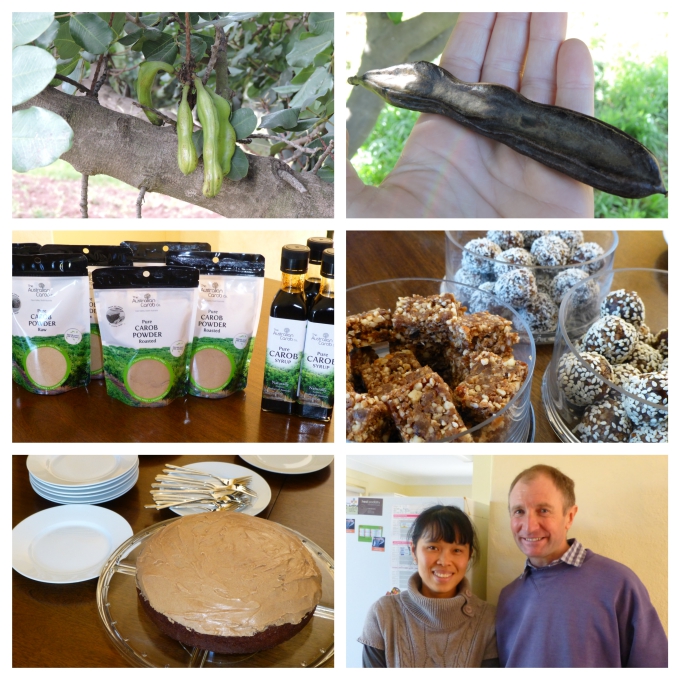 I was intrigued by this farm. I knew so little about Carob and I wondered why the Jolley’s had moved in this farming direction.
When quizzed, they were happy to divulge, it was certainly a labour of love.
They bought the property 20 or so years ago on a wing and a prayer, and painstakingly planted every single one of the 6000 Carob trees, together as a duo.
The Jolley’s then decided, that the only way to produce a top quality product that they could feel proud of, was to control every aspect of the manufacturing process themselves.
They oversee on their family owned farm, the entire operation from orchard to shelves, and it shows.
The Carob they offer is an absolute delight.
Jam, being a true whiz in the kitchen, whipped up some tasty Carob treats for our morning tea, and after receiving our goodie bag (for which I am so damn grateful) the evil genius in me immediately set to work, mentally compiling a list of recipes that I now want to create with Carob as the star… my family will never know it’s healthy WAHAHAHAHA!

After the Carob Farm, we set off for Four Leaf Milling, and the promise of more food.
The thought of ingesting anything further filled me with a crippling fear. I couldn’t possibly eat another bite.
The lunch that awaited us however, was so enticing, there literally was no choice… Must. Eat. Now!
Free Range Chicken, Eggplant and Brown Rice Pilaf, Hommus (Ohhhh God, they know my weakness…) with Avocado and Beetroot and finally a Mung Bean and Lentil Tabbouleh.
Hilariously, I went back for seconds.
After devouring my 2 plates of food and knocking back a sparkling Shiraz, we were treated to a tour of the mill.
Four Leaf is a family owned company, that has been milling certified organic grains for over 40 years.
Founded by Rosemary and Gavin Dunn and named after the actual four leaf clover Gavin himself found on the property, the company is now managed by their son Phil and daughter Helen.
The mill was initially built to process the wheat and oats the Dunn’s were growing on their farm, and the stone mills and much of the still operational machinery were designed by Gavin himself.
Four Leaf now have over 60 product lines, including a recently introduced line of delicious, instant snack cups, which my children loved and demolished in seconds.
They sell direct to the public at the mill, as well as through many retail shops and manufacturers.
As one final parting gesture, and because we hadn’t already eaten enough on this trip, we were treated to a slice of homemade Mandarin and Polenta cake. Seriously delicious, and a perfect way to end our eating extravaganza. We were all now literally, Rollin’ in the Valley and onto the bus. 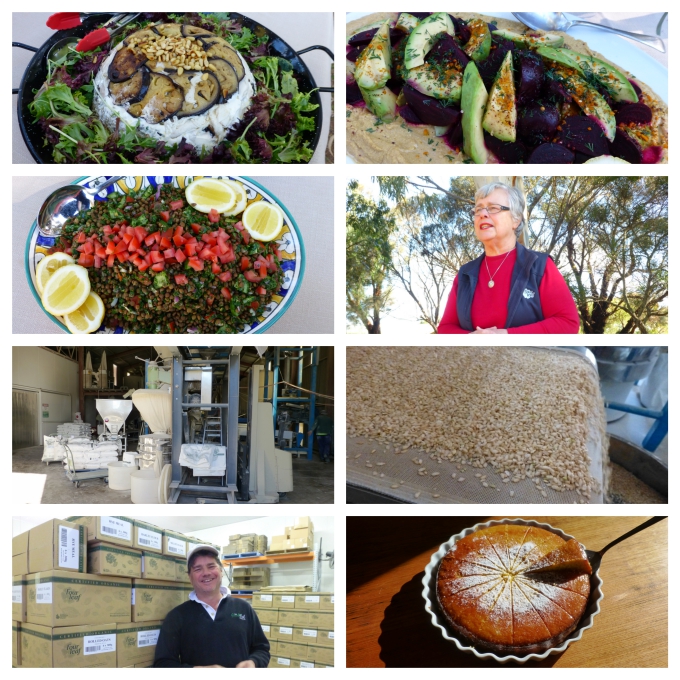 Anyhoo, now alas, it was time to bid farewell to the Valley.
We had to return to the big smoke, and to reality.
We had the bus ride home to reflect on the tour and laugh among ourselves about the adventure we’d just shared. But, mostly we just sat in silence, checking our emails (and Instagram) and pondering the day we might return to this little piece of foodie paradise.
I was astounded by the sense of pride I’d witnessed on this trip to the Clare Valley. The people there are not in it to make million’s, they do it for the love. It’s apparent in the quality of their produce and the passion that they show for what they do.
I was absolutely inspired and I’m truly grateful for the experience, and the opportunity to enter their homes and businesses with such generous hospitality.
Thank you so very much, Clare Valley… I’ll be seeing you again real soon.