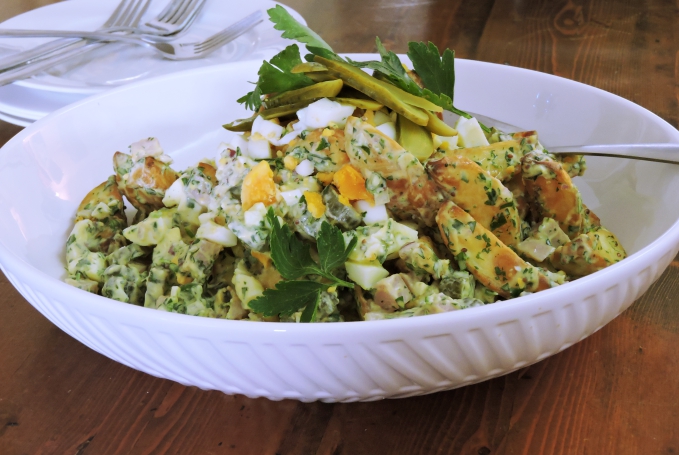 I’m often asked what my heritage is.
For some reason, it’s widely assumed that I hail from Mediterranean shores. But, as splendid as this might have been, it’s just not the case.
I’m what you would describe as, a mongrel mix.
French, Dutch, German, English, Aussie… There’s probably more in there too, but I’ve never bothered investigating my family tree.
I grew up with a very European food culture, on both sides of my family fence.

I recall as a child, dry retching while my Dad ate Rollmops and Dutch licorice in front of me. Obviously, I’m a fan of them both now…
I remember going to Nanna and Opa’s and devouring German, French and Dutch food.
My Nanna was a fabulous cook.
The house at any gathering, would be full of my father’s ridiculously large family, and you’d barely see her, she’d be tucked away in the kitchen cooking up a feast.
She made the most delicious sauce for meat and steak. Creamy, almost like a Diane. I asked her to show me how one Christmas (yes, even as a small child, I was obsessed with food) and she happily obliged.
I have since tried, several times, to recreate it, but I can’t. I was too young, and I can’t fully remember her recipe… If any of my family have it (and are reading this), pretty please, send it my way!

Mum’s side is the same.
My mother’s family are all as obsessed about food as me. This is not an exaggeration.
Anytime we catch up, it’s all about the food.
My Grandmother was an amazing cook.
Typically British, she made Stews, Roasts and all those other delectable English comfort staples.
I think she’s the reason I’ve got such an affinity with preserves.
She had two gigantic Apricot and Fig trees in her backyard and I loved inhaling the ripe fruit straight from the low hanging branches (I also ate the dry biscuits out of her cats dinner bowl too… Hmmm always a savoury tooth, but that’s just freakin’ scary…).
Her Apricot Jam was out of this World, and I remember every Summer, she’d have pots of it bubbling away on the stove.
She taught her daughters everything she knew, and they in turn taught their daughters… And, now we’ll all teach our daughters…
I’m not someone who learnt to cook, because they grew up being fed shizen food at home.
I learnt to cook and appreciate food from the remarkably good cooks around me (them, and the food channel), and I still do.
I tend to surround myself with people who love food, because they’re always the best kind of people…

So in honour of a dish that I grew up with, and was a staple every year on our Christmas Eve table, I’m gifting you my Festive Feast recipe for Roasted German Potato salad.
This isn’t traditional (Yes, I can already hear you telling me off Dad…), but it’s delicious and it’s easy… And it’s Christmas soon, and I’m excited, and I’m nostalgic.