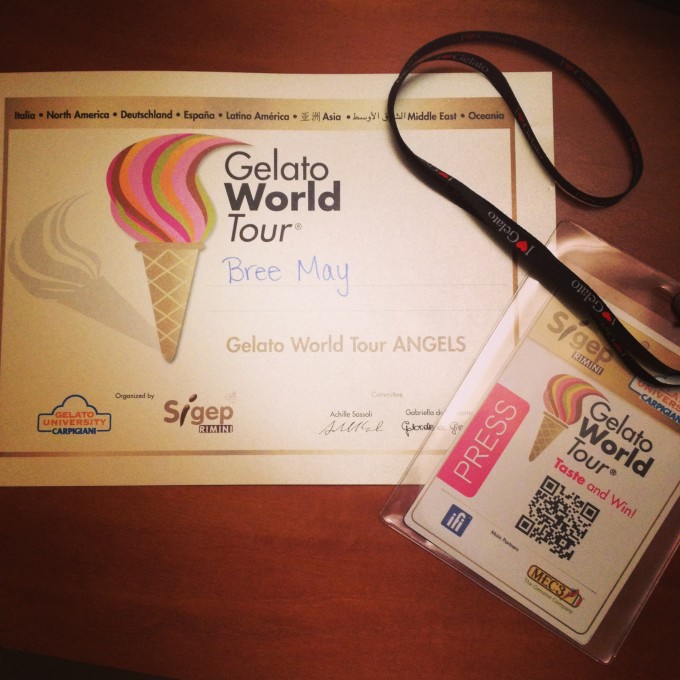 One word… Gelato.
When you hear it, it makes you smile.
It invokes only feelings of joy and happiness, that is, until you’re down to the last spoonful in your cup and become immediately fraught with anxiety and sorrow.
There is nothing about gelato that I don’t love. Something so right, could never be wrong.

I’m not even going to say that I was lucky, because it’s too much of an understatement.
I’m going to tell you the truth.
That the journey I embarked upon to be a juror at the World Gelato Tour was not luck, it was a divine gift from the Heavens that I am certain is for an extraordinary deed I committed in a previous life.
Yes, I believe past Karma… However, my friends all tell me that I’m just reaping the universal rewards for going on TV and not being an asshole.
In any case, it was a true Bucket List experience. One for which, I am eternally grateful and pray to recreate… PLEASE! I’ll do anything… and, I mean anything… 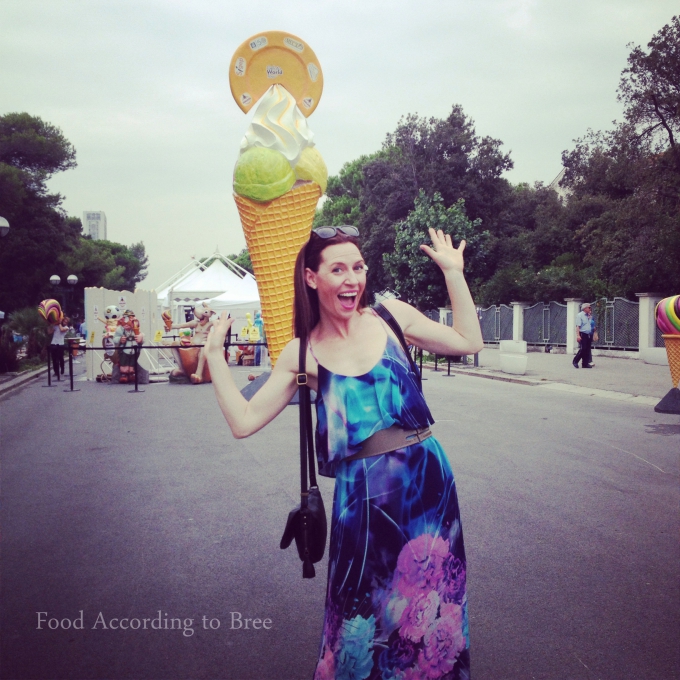 The Italian way of life and food culture are inextricably intertwined.
In Italy, gelato isn’t a treat, it’s a food group. Some even believe it can cure Cancer… Hmmm, not sure about that, but at least you’d die happy.
Italians don’t eat to live, they live to eat.
And, the Gelato World Tour is testament to this. The tours aim is to globally spread Italian gelato culture, and it has definitely worked. When the tour stopped in Melbourne, there were lines around the block for hours of hungry punters craving the icy delights within.
Quite surprisingly, besides Italy, the country that eats gelato more than any other is Japan. There are now over 1500 Japanese artisan gelataria’s.
I do declare, nothing would follow a spicy Ramen better, than a perfectly cool cup of Lemon Sorbet. I can certainly see the Japanese appeal… 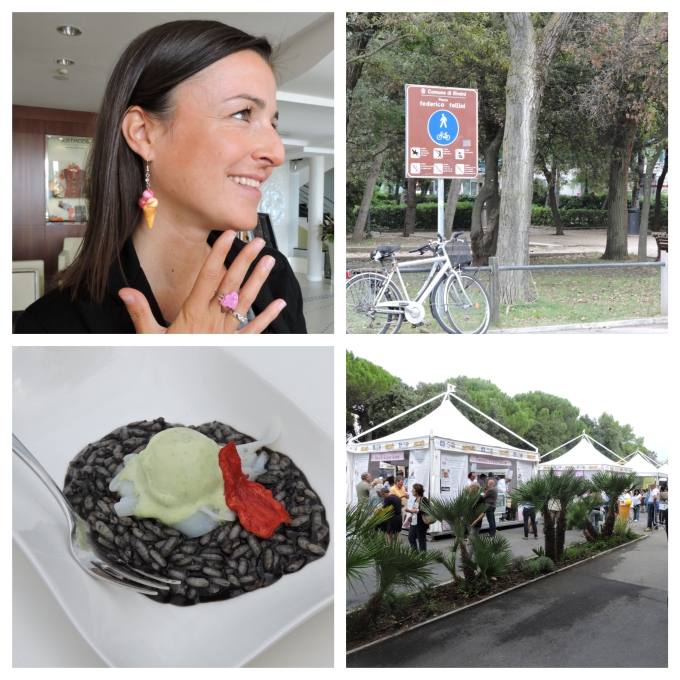 As the trip went on, and I learnt more from the jurors and artisans I met, I realized that creating gelato is an art form.
To be a true artisan, you don’t just make gelato, you invent. They are highly skilled and animated chefs.
And, eating gelato is also a learned skill. Knowing the difference between a good gelato and a great gelato must be taught, and after this experience, I will never look at gelato the same way again.

On inauguration day, myself and a bunch of other jurors piled on the bus and made our way to the World Tour village. A makeshift gelato commune, set up next to Federico Fellini Park. We were handed our press passes, and set free among the sea of gelato to eat our fill and meet the artisans.
Firstly, I sampled a truly remarkable dish of Cuttlefish Risotto with Pea Gelato, which was prepared in front of us by famed local Chef, Silver Succi from Quartopiano Ristorante.
I then took off with some other jurors, and gleefully tried all Twenty Four mouth-watering World Tour flavours. I enjoyed every single lick.
The first two were served to me in cups, which I promptly demolished. I soon realized however, if I kept that up I’d be in a sugar coma within the hour, so I reluctantly downgraded my quantities to a large spoonful instead. 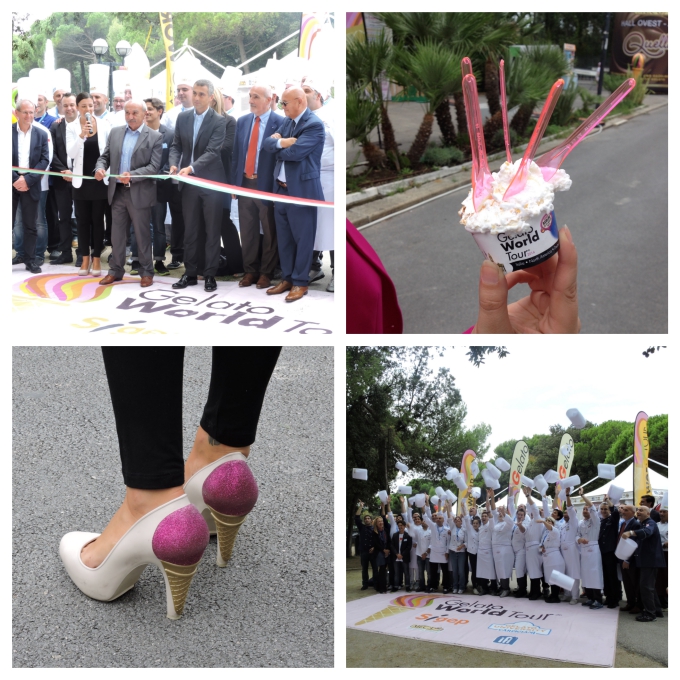 There were three spectacular Australian teams competing in this Clash of the Sugar Titans.
I first made my way to Diana Kontoprias from Frangipani Gelato in Cronulla.
Diana was offering up her signature flavour of Pavlova.
It tasted exactly as a Pavlova should. It was sweet, there was the unmistakable base of creamy meringue and it was topped off with a tangy swirl of passionfruit that cut through the sugar just as it intended.
As one of only three women in the competition, Diana was representing for the sista’s and doing us proud. An absolute treat and an inspired and clever flavour.

Next up, I visited Donato Toce and Simone Panetta ,the boys from Messina in Fitzroy, Melbourne.
They were competing with their flavour, Cremino. A salted caramel with housemade gianduia fudge, crushed meringue and amaretti biscuits.
The meringue and fudge was swirled through the sweet caramel like a decadent ribbon and the homemade biscuits gave it great texture.
Messina is synonymous with amazing gelato in Australia. There are constant lines down the street from every one of their gelataria’s, and their World Tour entry was as you’d expect from such a much loved institution. Certainly crowd pleasing, delicious and a well deserved finalist.

But then, I made my way to meet John and Sam Crowl. The father and son duo from Cow & the Moon in Enmore, Sydney.
OK, maybe I was biased because I adore anything with coffee in it, but this gelato lingered with me long after I’d sampled many more.
I could taste the caramel, but it wasn’t overly sweet. The salt was perfectly balanced and the coffee and vanilla cloaked the entire gelato like a gorgeous veil. To finish it off, the texture and flavour from the caramel and Kenyan coffee almonds was a sparkling jewel in the smooth, creamy crown.
A couple of days later, when it came time to vote, I eagerly anticipated this gelato and Cow & the Moon didn’t let me down. 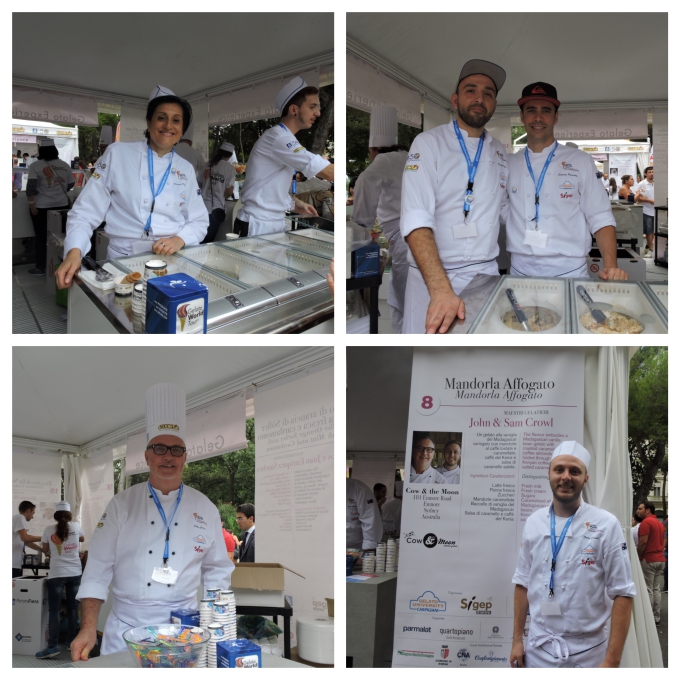 Like most ordinary gluttons, I knew nothing about gelato other than what flavours I do and don’t like.
Though I decided early on, I wanted to try and judge with some insight.
One point does count.
And, although for many of us this tour was just a Candyland trip of wild dreams and fantasies, for the artisans themselves, this is their life’s work and the opportunity to be inducted into the Hall of Gelato Fame.
This trophy will change someone’s future.

So I set about picking the brains of Martino, Ken and Flavio. Three gelato experts from Sydney who were on the technical jury.
Martino and Ken together, as part of Team Australia won a first place at the 2014 Gelato World Cup. Martino owns and operates a gelataria called Art of Gelato Michelangelo in Carramar, Ken is the head teacher at Sydney TAFE for Baking and Pâtisserie and Flavio is an executive for Bravo Gelato.
I began asking questions, and my new mentors were happy to impart. I learnt what I could from them about texture, structure and flavour composition. Gelato is a seriously complex creation.
In the end, those of us on the media jury were told to solely judge on taste, which I was truly happy and relieved about. Even with all their splendid coaching, I’m still only good at knowing what is yummy.

The judging was conducted by 4 different juries.
The technical jury, which comprised of the worlds best artisans and gelato experts.
The media jury, which was made up of journalists, writers and other food industry professionals.
The public, who’s votes were counted by the flavours they chose to sample in the village, and the artisans themselves, who could vote for the flavour they would most like to sell in their own shops.

On judgement day, I had two very clear standouts.
I honestly couldn’t decide, so I awarded them both equal points as my joint number 1’s.
Cow & the Moon’s unbelievable Mandora Affogato and a gelataria from Austin called Teo, who served their seriously amaze Texas Pecan Pie laced with Bourbon Whiskey.
The latter deserving a massive High-5 because it was interesting, delicious, well balanced and a gelato I’d be happy to eat again and again because, anything with booze in it always gets my vote.

I can’t tell you how elated I was, when the victor was called and it was our boys from OZ.
I screamed out loud, not only for them, but for myself for picking the winner.
It was a 24 horse race and these guys were Phar Lap, unbeatable and full of heart.
John and Sam Crowl absolutely deserve that World’s Best Gelato title.
Their utopian offering was a truly memorable experience and if you are in Sydney, I implore you to put Cow & The Moon on your must eat list.
Oh yes, sweet Affogato dreams are certainly made of this…

A special shout-out also to the lovely and talented, Diana. She was awarded peer’s choice by the artisans for having the most coveted flavour, her delightful Pavlova. Well done fabulous lady! 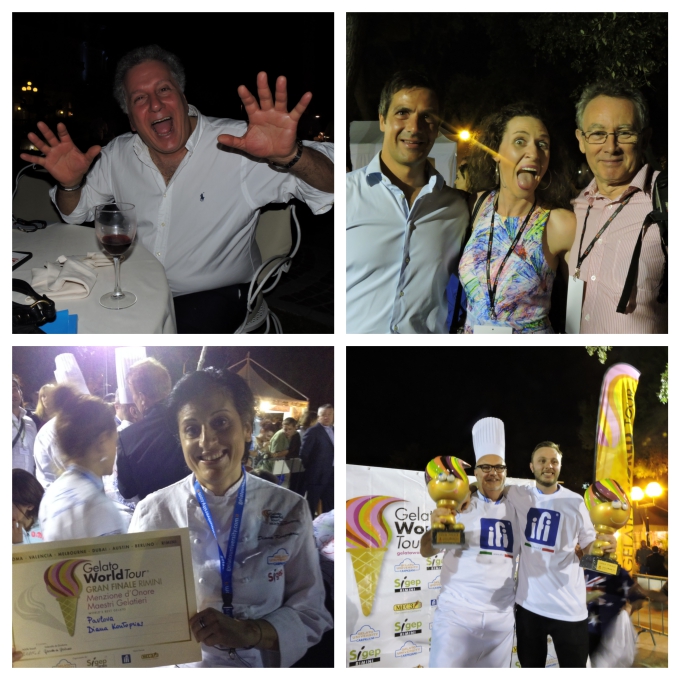 For more information about the finalists and their delicious World Tour entry flavours, you can visit the following links;

Cow and the Moon – Mandorla Affogato

Cone Street – One thousand and one snacks (Chocolate with infusions)

Versace Gelateria – The scent of Sicily (Ricotta, Citrus and Caramel)