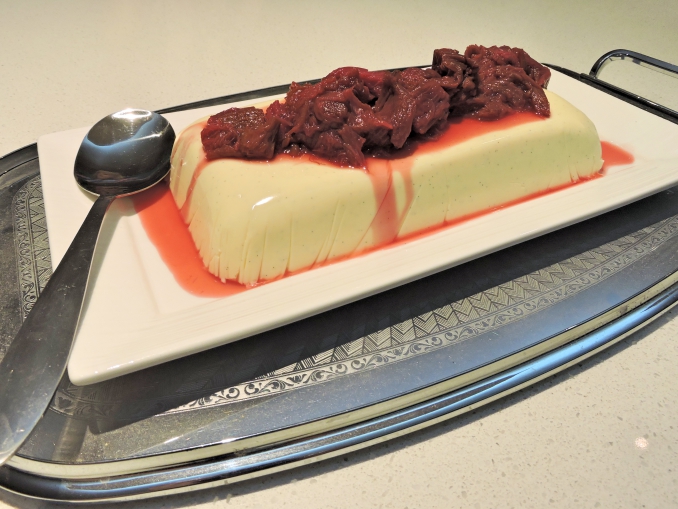 Friday Feasts are soooo 2 weeks ago…
No seriously, they are.
Since I (hesitantly) decided to blog whenever the fancy takes me, the name Friday Feast is regrettably obsolete.
But, Friday Feast does have a certain kind of ring to it.
So, instead we will call these recipes… Drum roll please…
‘Festive Feasts!’
Holy Hell, sometimes I’m so damn clever, I even impress myself.

Anyhoo, today’s ‘F.F.’ is actually, really quite festive.
I could see this dish on the dining table at any feasting soiree.
Why, You ask…?
You can bend it to your seasonal will.
Don’t like Rhubarb? Top it with Cherries poached in Vodka. Oh yes, that sounds truly drool worthy, doesn’t it…

Note to Self: Invent recipe for Vodka Poached Cherries

It’s Winter, and you don’t like Rhubarb?
Top it with Caramelized Pears spiced with Star Anise.

Note to Self: Invent recipe for Caramelized Aniseed Pears

But, also, Panna Cotta is the EASIEST dessert known to mankind.
A 5 year old can do it.
And, it’s a make ahead affair, so all you need to do is decant your spoils at service (Which comes in handy, if you like a tipple or 10…).

However, what I find truly festive about this dish, is not the recipe itself, but the light bulb moment I had when I decided to make a gigantic Panna Cotta instead of little, itty, bitty singular ones.
OK, I am not insinuating that I invented the concept of a large Panna Cotta.
No, I am merely stating, that it’s generally not the normal way people do these things… But, we all should.

If there is one thing in this world, that truly grinds my gears, it’s somebody taking a whole Panna Cotta, consuming two mouthfuls, then exclaiming…“OHHHH, I’m just too full, I couldn’t possibly have another bite”.
YOU BASTARDS!
There is now a half eaten dessert, that someone else would’ve enjoyed, languishing on the table, awaiting the bin.
I know I’m not alone here…?
If you’re someone who’s not only enraged by dessert wasting dork faces, but, who also finds those itty, bitty Panna Cotta’s far, too small.
I know you too, have been craving a way to ease your suffering…
Well, deliverance is nigh!

Make it in a loaf tin, people.
Line that tin with cling wrap. Pour in that opaque gold. Put it in the fridge. Voila!
Serve that giant, creamy jewel to your hungry (and not so hungry) punters and, let everyone take what they desire.
Never again, will the excuse “I’m too full to finish”, wash.
If someone decides to fill their plate, they better clean it, or they’ll be wearing my palm like makeup.

So I will leave you now to ponder this post in unbridled agreement.
Because, even if you hadn’t realized that Panna Cotta faux pas gave you the wilts… You’re now reflecting on dinner parties past, and nodding your head aren’t you? Uh Huh.