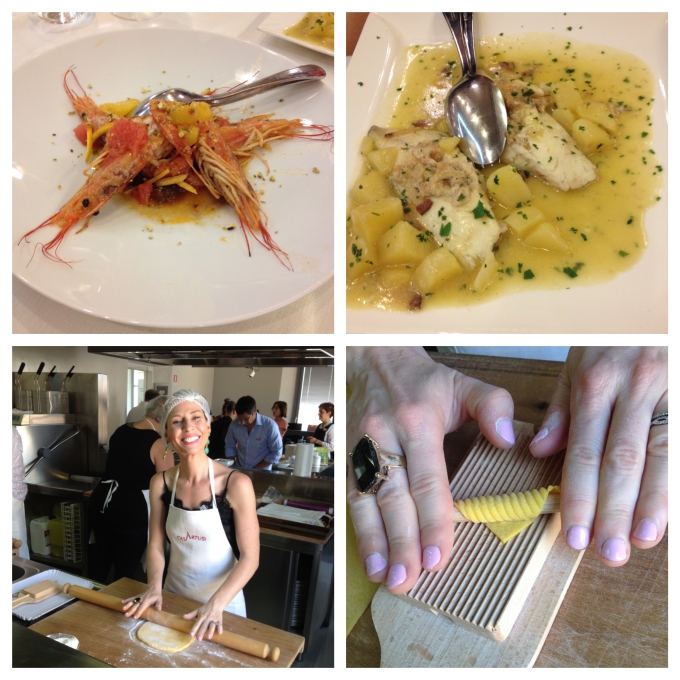 The dream continues on…

On my third day in Rimini, it was the inauguration ceremony for the Gelato World Tour.
After eating our way though the gelato village, some of us more dedicated gluttons, decided we needed lunch in order to carry on.
Myself and my new friends Victoria, a foodie who works for the James Beard Foundation in NYC (Oh yes, Cory and I will be darkening her New Jersey doorway soon enough…) and Amanda, an editor from Sydney, asked Michela if we could steal away for a sneaky bite to eat.
And, dear God, I’m glad we did…
We had a local street food specialty that was a cross between a Calzone and a Piadina (I can’t remember for the life of me what it was called… Michela, can you help me out?) and was filled with sautéed spinach and Stracchino cheese.
I LOVE spinach and cheese, it’s a match made in glorious heaven. And, this friends, was a heavenly lunch and one more sexy notch on my good eatin’ bed post. 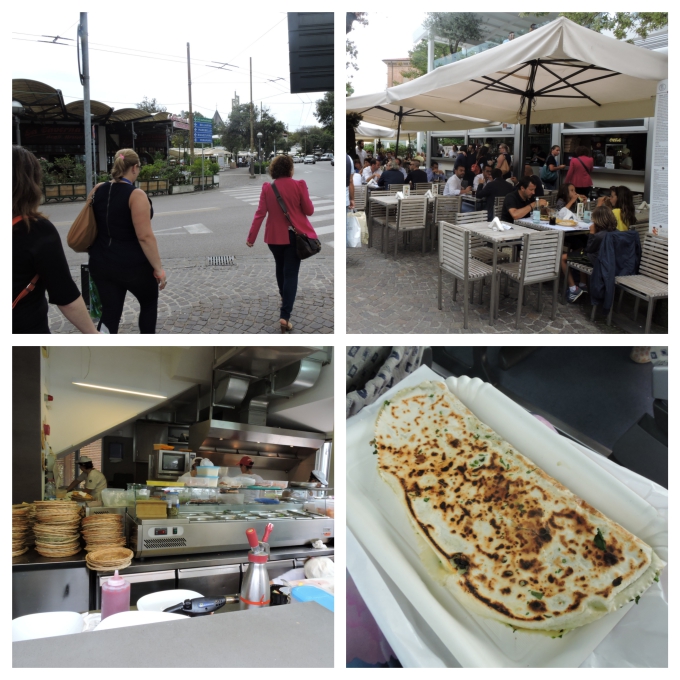 We then made our way to Rimini Fiera.
A HUGE expo centre made up of 16 halls and covering a total area of 460’000 square metres.
Fiera houses many expos, but Sigep, the gelato expo is by far the largest, and is the only one that utilizes the entire, gigantic complex.
Now I definitely know, gelato in these parts is freakin’ massive business. 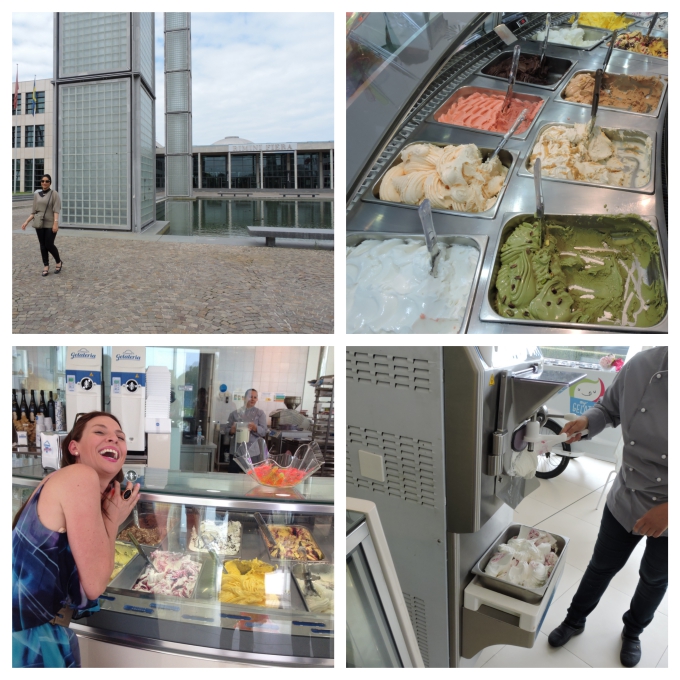 After the Fiera we were taken to the Carpigiani Gelato Factory, University and Museum.
On the bus ride there we were advised when we arrive, we can have ourselves a coffee… or more Gelato.
I laughed out loud. More gelato?
I’d already eaten 24 flavours by lunch… we arrived at Carpigiani and my immediate thought was… Screw coffee, give me more gelato!
It seems the boundless gelato consumption during this trip hasn’t diminished my obsession with this sub-zero hero, it’s only intensified it tenfold.
I’m fairly certain now, that I’ll suffer withdrawals if I don’t get my immediate fix when I crave it. Gelato is an addiction, and I’m happy to be enslaved.
The museum was awesome and not just because of the fact, that it is even in existence. A museum dedicated to gelato, gets my massive thumbs up.
The history of gelato is interesting and long and what makes it even more special is the fact that the tradition of gelato hasn’t really changed, except for maybe the more outlandish flavours available these days.
Gelato has been adored throughout the ages, it’s as well loved now, as it’s ever been. More so really, because the rest of the World has now cottoned on to it’s sheer fabulousness. 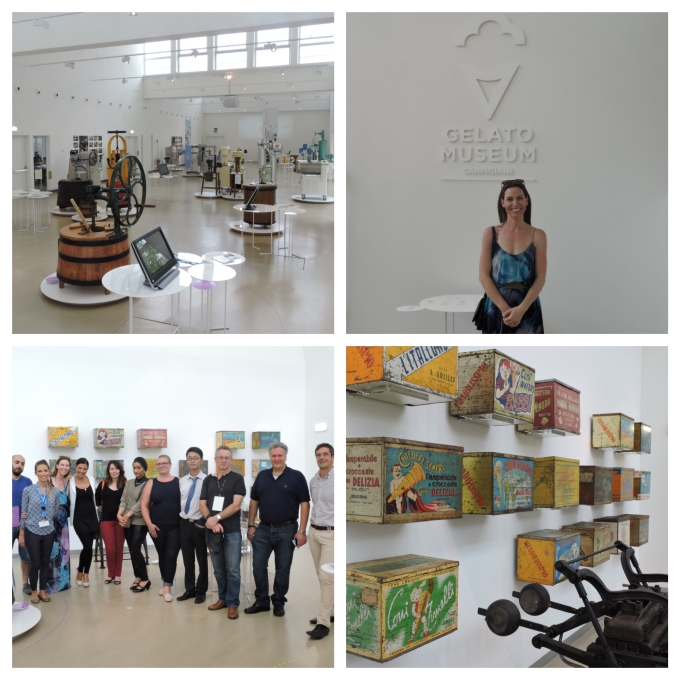 The University was even better.
Say it with me, say it out loud… Gelato University.
Such a place only ever existed in my dreams.
In a land on the clouds full of gingerbread houses, chocolate roads, edible flowers and rainbow rivers…
The concept seems so fanciful to me, but I assure you there is nothing fanciful about it, that is except for my now burning desire to become a student and learn the art of gelato making myself.
We were treated to some savoury gelato. And to hear it, it sounds so wrong, but it was oh, so right…
Chilli gelato and Parmegiano Regiano gelato. The latter being something so truly remarkable, it tasted more like cheese, than cheese itself. We were also gifted a Vanilla, so creamy and divine it leaves all others I’ve ever tasted, for dead.
The University runs courses for 1 week to 1 month, depending on your personal, learning needs.
They even have children’s workshops, so you can dump the kids and ride off into the Italian sunset on your rented Ducati… Ahem, not that that’s something Cory and I would actually do… or would we…? 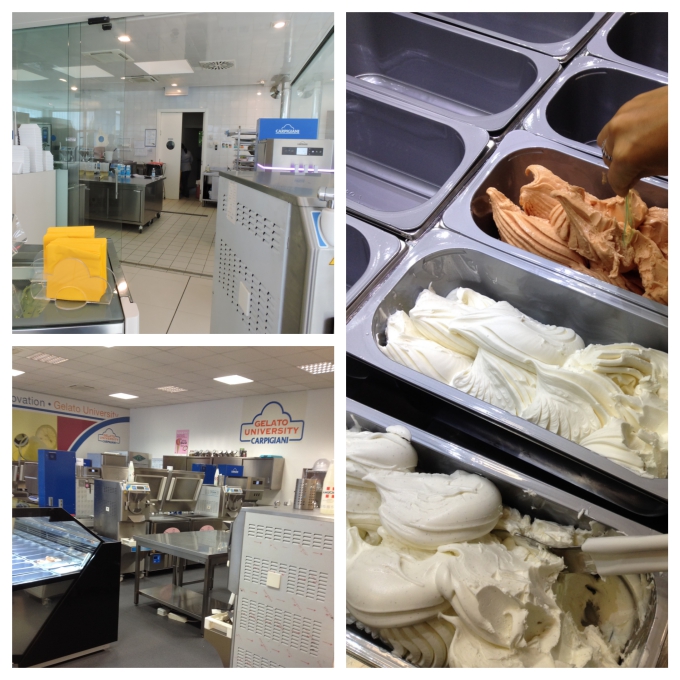 That evening, Victoria, Amanda and I decided to enjoy a seafood dinner together. Based upon a recommendation by our hotel concierge (and because we were hungry and it was super close) we made the short walk from the Savoia to a little back street restaurant called Il Pesce Innamorato.
Yes, I do love fish. And, this place was amazing.
We treated ourselves to a 5 course meal of Adriatic seafood and pasta, that will live in my memory for years to come.
The dainty pillows of ravioli with a creamy, salty sauce of prawns and truffles (that as Victoria so eloquently put it, were like soft little bottle caps) will forever linger in my mind.
One of only two regrets I have from this entire trip, is not photographing every single dish from this meal.
Ordinarily, I make everyone suffer through my obsessive food photography. But, just once, I wanted to enjoy dinner without feeling the absolute need to entirely document it. I could never have known it would be one of the best meals I’d eat in Italy. That’ll teach me.
The other regret, you ask…? Is not having a second battery for my camera… WHEN in the name of all that is holy, will I freakin’ learn?

The following day, our amazing hosts treated a group of us to an experience so wonderful, I could never possibly convey just how much it means to me and how truly thankful I am to them.
Valentina organised a special trip to Casa Artusi in Forlimpopoli.
A restaurant, museum and school founded in the name of the Godfather of Italian home cooking, Pellegrino Artusi.
While there, we were taught how to make hand rolled and cut, pasta shapes the traditional Italian way and fresh Piadina.
Afterwards, we ate a lunch of simple, yet delicious Piadina, cheeses and preserves with a cool glass of Italian white. Heaven.

We were then taken on a guided tour around Rimini City Centre.
What a gorgeous and interesting place, so full of history and culture. There’s a museum in the centre that houses artefacts found in an ancient home occupied by a surgeon. I’m telling you now, had I lived in those days, I’d actually rather succumb to my affliction, than enter that house of horrors…
We also saw, Fellini’s original book of dreams. That man was seriously bent… if not truly brilliant. 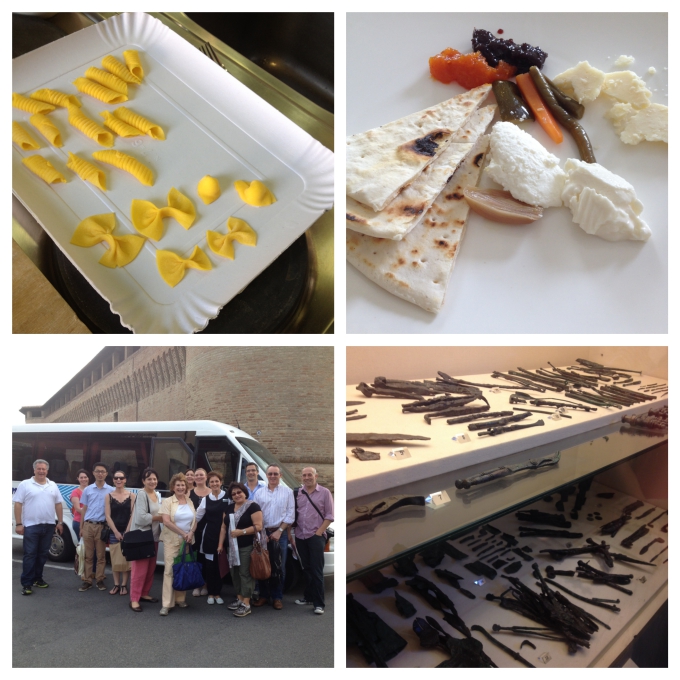 That evening, myself and a group of other jurors dined at a restaurant by the seaside called Ristorante La Posada.
Another magical, well priced meal.
I ate Vongole ala’marinara. Sighhhh of happiness… This was simplicity at its finest. Clams, white wine and lemon, that is all. That’s actually all it ever needed.
I then had a Radicchio, Speck and Gorgonzola Pizza. Yes, it was as good as you imagine… maybe better.
After dinner, a few of us girls decided to burn some calories and walk back to the hotel, but unfortunately, we got lost. Yes, I can already hear that collective male groan…
Look, I have never claimed to be good at directions, in fact I’m the opposite and will go missing in my own suburb. Just ask Cory about the time we drove through Melbourne in the wrong direction for an hour, because I thought the top of the street directory page was always North.

Note to self: Next time, take a cab.

Our second to last day in Rimini we were free until 3:30pm, when the Gelato World Tour judging was due to commence.
Victoria and I decided over croissants and coffee at breakfast, that we were going to enjoy the glorious Adriatic sunshine by reserving loungers on the beach and lapping it up.
We took a refreshing dip in the sea, then treated ourselves to Campari cocktails and Caprese Panini’s in the sun.
OK, I stayed in the shade like a vampire, because my lily white skin is allergic to UV rays (and, I’m also allergic to wrinkles and Cancer).
Later that evening, after the judging had been judged and the winning had been won, a few of us jurors ended the evening, and our perfect Adriatic adventure with local Limoncello and wine on the balcony. 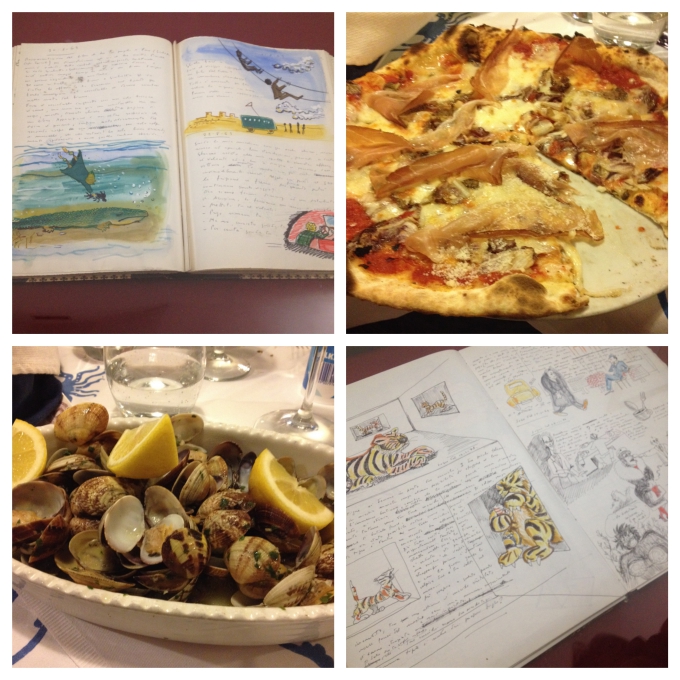